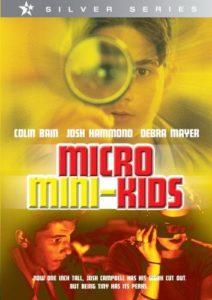 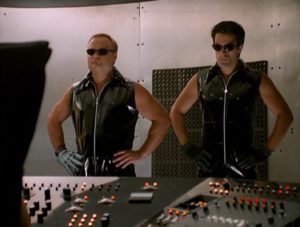 Anyway, Micro Mini Kids is about Josh (Chad Gordon), a short guy who has the hots for Courtney (Lauren Petty), one of the school’s prettiest girls and who just so happens to be dating Josh’s bully, Blake (Sam Page). Josh and his friend Rudy (Kyle Chaos) have created a working scale model of the Nautilus from 20,000 Leagues Under the Sea, and much to their surprise it attracts the attention of Courtney. She invites them to her party at a local club named The Water Den. Instead of being excited, Josh is fixated on how short he is and how he needs to grow a few inches ASAP. That leads Josh and Rudy to the home of ultra-hacker Molly (Jessica Taylor) to “hack” him taller, and we’re off!

I know hacking someone taller doesn’t make sense, but this is a great example of B-Movie logic. The characters in the film don’t even question it for a second. Oh, hack him taller? Sure, let me see what I can do! This spirit of reckless creativity is why I love B-Movies so much, and while they don’t always deliver, the promise of something unique is always more interesting than the safe land of corporate mainstream filmmaking. So later when Josh and Rudy assemble a potion with lipstick, marshmallows, sugar, and other random household items, I watched with an open mind and a big smile. There’s no way to see that coming, and if anyone said they predicted that the potion would then be microwaved to cause an incredible chemical reaction that results in the concoction turning into a simple bowl of water, well, then that’s one lying friend you can feel free to let go off.

Micro Mini Kids is no masterpiece, but if you’re OK with watching a low-budget movie aimed at kids, you could do a lot worse than this. And unlike most of the Moonbeam films, this one is actually available on DVD and rentable from Netflix! So if a Full Moon film inspired by Fantastic Voyage / InnerSpace floats your boat, then give this one a whirl.