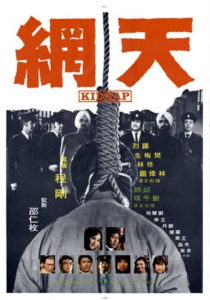 These four men and their situations make up the foundation of the film; everything they do is in an effort to leave these humiliating circumstances behind. But it is Lung Wei who leads their descent into crime. After he is caught in a lie about being a rich man (to woo Chin Chueh (Woo Gam), a beautiful stripper), the public embarrassment drives him to drastic measures. He hatches a plan to kidnap his cocky boss, the man who recognized him at a fancy restaurant and unceremoniously blew his cover to Chin Chueh. Lung Wei and his friends hope to recover a large sum of ransom money, that will then afford them a better life. Not the most sound logic, but they are desperate for a way out of their hopeless situations.

I don’t condone their actions, but I did feel sympathy for the kidnappers. I grew up relatively poor and I deeply understand the hopelessness and desire to break free from a low social status. Kidnapping a rich guy and keeping him in a box for weeks is definitely not the way to go about it, but despite their methods director Cheng Kang humanizes the men well. This turns the simple tale of dramatized true crime into something much more akin to a classic tragedy, and as such Kidnap is a great film. It begins by stressing the moral, and that we should “leave no new footprints on the path these men once walked,” but the movie works because of the conflicted emotions we feel for the main characters.

Visually, Kidnap is one of the best-looking modern-day Shaw films I’ve seen. Cheng Kang’s camerawork wrings out every bit of tension from the situations, bringing us deep into the middle of these men’s lives. When they have Cheng Miu locked in the box, we’re right there with him, our only light source a harsh, deep-blue glow. I can’t stress enough how nice this movie looks (in spite of its not-so-nice subject matter); just about every shot is frame-worthy. Cheng also pulls deep, resonant performances from his cast who were mostly known for their martial arts film roles. Lo Lieh, Tung Lam and Fan Mei-Sheng are simply fantastic in Kidnap, showing their true abilities when allowed to stretch themselves beyond the well-known framework of martial arts characters.

Kidnap is not an action movie, but the action present is very important to the success of the film. Choreographed by the wonderful Ching Siu-Tung (well before he made a name for himself as either a choreographer or a director), the action is never flashy or anything more than something to forward the narrative. It does not exist as a separate component of the film, it simply arises naturally during the film and plays out like unchoreographed reality. This could be due to Ching’s lack of experience (this was only his fifth credited film as a choreographer), but I believe the lack of attention-getting action is the specific intention of the film. The kidnapping of Wang Fu Chiu (Lau Dan) is especially tense and well-handled, and overall Ching does well with what the film requires (which admittedly isn’t a lot). And I’m not just saying that because I love his later work, or because he’s Cheng Kang’s son!

With its tangled, tragic web of good men descending into crime, Kidnap is a unique and stark Shaw Brothers film. It was a huge success and one of the most successful films of the year, and would later influence the true crime genre that followed in its wake (including the Cheng Kang-spearheaded anthology series The Criminals).

I uploaded the original trailer just for this review!

Next up in this chronological journey through the Shaw Brothers Martial Arts catalog is the next film in Chang Cheh’s Shaolin Cycle, Five Shaolin Masters! Can’t wait! See ya then!