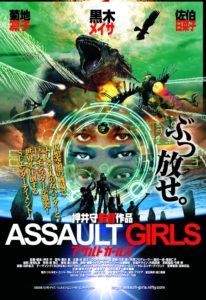 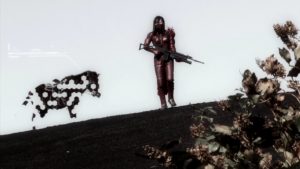 The movie describes a future that has become unfulfilling and emotionless from its focus on efficiency, and that the only outlet for actual human emotion has become virtual reality computer games. This sets you up for a deep and philosophical film about what we need as human beings and what we sacrifice for our modern technological lifestyle. At first I felt that these themes, or any other for that matter, were woefully absent in the rest of the film, but in retrospect I can see what it was talking about much clearer than during the movie itself.

The plot revolves around four players of an online game, each trying to defeat a powerful monster and advance to the next area. They mostly don’t get along and operate alone, but the game tells them that they cannot advance without working together. So they grudgingly put aside their differences and team up to take on the giant snake monster blocking their progress. 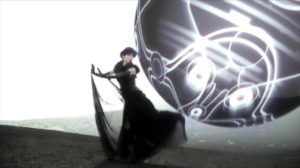 Each character engages with the game in their own way, deriving satisfaction from different sources. Grey just wants to win. Colonel has a family to support, and through some unexplained process makes money in the real world by playing the game. Lucifer enjoys simply experiencing the world around her, dancing around with childlike delight at any situation. Jäger, the only man in the group, enjoys the experience of life on the trail and surviving in the harsh wilderness of the game world.

It’s easy to see this as contradictory to the film’s setup. If people can only feel emotion in the game world, surely that would be where all the socialization and human connections occur, right? Well, not so much. The film has to be seen through the lens of Japan’s current social issues. At the moment, Japan has a dwindling population due to a culture that encourages workaholics. Marriage rates, and corresponding birth rates, keep dropping as people just don’t have enough time away from their jobs to sustain relationships out of work. The lower population has created a larger percentage of elderly retired workers, which puts even more pressure on the smaller population of young workers. This just feeds the problems that make people choose not to have a family, and so the spiral continues downward. 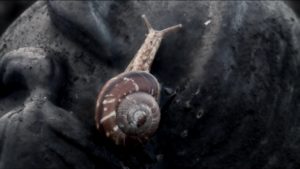 Assault Girls reflects this growing problem in Japan. The characters are just like the modern Japanese citizen. Each is dedicated to their own goals to the exclusion of all else. The game is their life, but they don’t want anything to do with each other. This ultimately leads them to failure, and in desperation they resort to those relationships that they have shunned, relationships that only lead to aggravation and conflict as they have to make sacrifices that they aren’t willing to accept.

Seen through that perspective, Assault Girls starts to make a lot more sense. But just because I figured out some of its themes doesn’t mean the film is all that good. It’s still really dull to sit through. Oshii constantly returns to the image of a snail, and I can’t help but feel that an animal primarily known for its lack of speed truly is the most appropriate symbol for this movie. Even at a mere hour in length the film still drags its ass way too much for me. 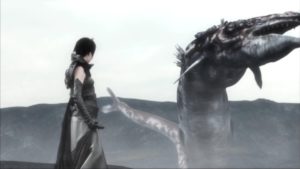 The action is also not very well made. It’s just a bunch of people standing around shooting at big fake-looking CG monsters. There’s one scene of hand-to-hand combat, but it’s a mess of quick cuts and incoherent choreography. I know Oshii is capable of better. The drab, colorless world only increases the boredom, and the bland, emotionless acting just makes these flaws more obvious. There is a bit of good Mamoru Oshii humor, thankfully, but it’s so sparse that it can’t hold up anything on its own. I was rather fond of Lucifer, though. Her childlike glee at anything and everything added some much needed levity. Her scenes were definitely the highlight of the film, especially since she encompassed most of the film’s humor as well.

I can’t say that I’m very fond of Assault Girls, but if you’re a big Mamoru Oshii fan you’ll probably find a lot to like here. It’s more of everything that defines Oshii’s style, with all the benefits and drawbacks that entails. The clumsy English dialog, bland action scenes, and obvious CG drag this one down quite a bit, though, so approach it with caution.