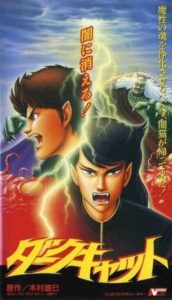 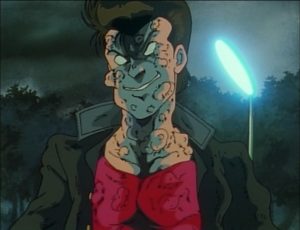 Basically, the story revolves around this couple as the boy goes into terminal depression because the girl he asked out turned him down, then his childhood friend also goes into terminal depression because the guy she loves is being a jackass. Since everyone is too busy being an emo loser to actually do anything interesting, they aren’t very sympathetic. And since so much of the runtime is just watching these two mope about, it gets really boring.

So whatever happened to that cat-eared guy and the disappearing girls? Well, the girl who dumped what’s-his-name is one of the girls who disappeared, but other than that, the whole disappearing girls thing just kinda gets forgotten. I assume the big evil cat monster was responsible for it, but that’s just a guess really. The evil cat guy is more into turning people into monsters than making them vanish, so it’s not even a good guess. The cat-eared guy — whose name is Hyoi — is ostensibly the main character, so even if we do spend more time following the depressed teenagers, he does pop up from time to time. His little brother, Ryoi, takes up more screen time than him, too. Your script really needs some work when the supposed main character isn’t even in half of the movie. 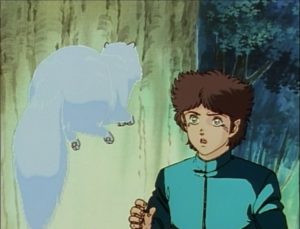 Hyoi is apparently a magical cat that can turn into a human. His little brother is also tagging along with him, and in cat form they’re the most misshapen cats I have ever seen animated. They track down evil spirits and defeat them for the sake of goodness, or something. He has some kind of history with a cat monster named Jukokubo who likes to raise and eat evil spirits for the sake of evilness, or something. The movie never really gets into it. There’s a good guy and a bad guy. That’s all, folks.

There are a few gruesome monsters lurking about, and a few action scenes, but none of it is all that intriguing. The monsters are kinda bland despite their gooey betentacled killing sprees, and the fights are the exact opposite of dramatic. It’s not all bad. There are a few mildly entertaining moments, even if they are accidental, like a floating Persian cat that lives out in the woods. It made me think, ever so briefly, about the cat from House, but that just made me wish this movie was as dementedly fun as that one instead of boring as hell.

Dark Cat isn’t a complete pile of shit, but it sure smells just as bad. It’s mopey and bland, and if creepy anime monsters mutilating people is what you’re after, then you’d be much better off with Battle Royal High School, which has a similar feel but actually follows through with the concept of balls-crazy action. Leave Dark Cat alone. Its few entertaining tidbits really aren’t worth it.