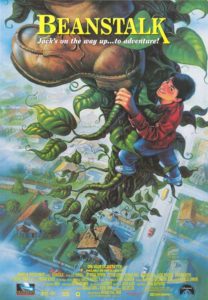 What I love about Beanstalk is how it’s not just an update of the story to modern times, it also considers the situations against modern society. As soon as the beanstalk sprouts up in Jack’s backyard, the entire town rallies to exploit and monetize it. It’s no longer innocent storybook times, these are the days of capitalism, and if there’s a dollar to be made they’re going to make it! The updates to the giants also follows this logic. When Jack ascends the beanstalk, you might expect the giants to live in castle, both because it’s in the original story and it’s a ’90s Full Moon movie! But no! The giants live in a 1950s-style house, and their lifestyle resembles a sitcom family more than the rough and tumble giant barbarians of the original story. Who saw that coming? Not me! They give a great explanation, too, which made me really love and appreciate it as a fan of sci-fi and inventive premises. 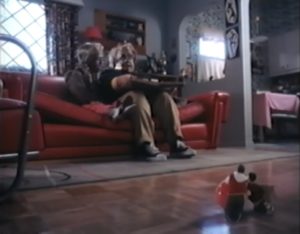 Beyond the obvious Jack and the giant dynamic, Beanstalk is stuffed with instances of big and small/the powerful and the powerless that take the film into the realm of providing a quality moral. The other Moonbeam films have some of this quality, but I haven’t seen anything as potent as in Beanstalk. Moonbeam films usually deal with a disconnect between parents and their children, and how they need to spend time with each other and value one another. Beanstalk is immediately different, as the mother and son are the BEST of friends, and it is the themes of fear, size, power and empathy that rise to the top. It’s really rather well-written for a kids’ B-movie, made all the more enjoyable because it’s able to do all this in under 80 minutes!

On top of this, the FX work is really well executed. This wasn’t Full Moon’s first attempt at pulling off the scale of giants and little people, as both Dollman and Dollman vs. Demonic Toys were made in the years prior to Beanstalk. The best bits come when Jack has to avoid the giant’s fist by scurrying underneath the tablecloth, and the composited scale shots are a lot of fun, too. Probably the only thing that doesn’t work perfectly is the kaiju section when the giant stomps around a miniature set, but I dig kaiju movies and miniatures so I loved it just as much as anything else in the movie. Your mileage may vary, though, but I suppose you could say that about anything, couldn’t you? 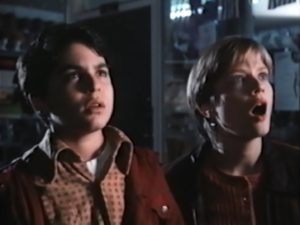 Beanstalk is one of the better Moonbeam films I’ve seen, and it’s also one of the few that I think would still please families to this day. I don’t have kids and I don’t really know anything about modern family movies, so what do I know, but that’s what it feels like to me. Hahahaha. Anyway, it’s funny, it’s got a good message, Margot Kidder is clearly having a ball being so wacky, and the main kid is actually likable! What more can I ask for as a 34-year-old guy who has no business watching movies made for kids?

I also want to note that writer/director Michael Davis also wrote a few other Moonbeam films (the Prehysteria! films, Pet Shop, and The Incredible Genie), and would later direct such films as Eight Days a Week with Keri Russell, and Shoot ‘Em Up with Clive Owen. I found it interesting because usually I look up the directors on these films and it’s pretty rare to find anyone that went on to make big Hollywood films!

Next time I get around to a Full Moon movie it’ll be October, so I’ll be watching Song of the Vampire starring and directed by Subspecies star Denice Duff! See ya then!