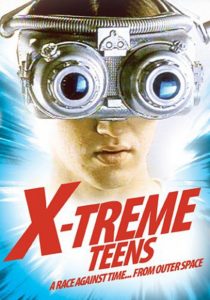 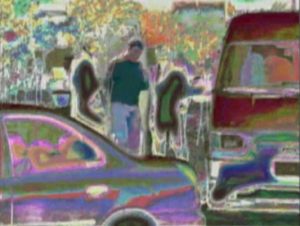 Andy (Bryan Neal) is your typical angst-ridden teenager, upset that his family has moved to a new town. To complicate matters, he’s also got to deal with a stepdad, John (Timothy Bottoms), who he doesn’t like and has no interest in bonding with. John seems like a good guy, though, and he tries to help Andy fit in at school by organizing a field trip to his new workplace: Vectrocomp, a research facility working on x-ray goggle technology. But not unlike Spider-man, while on said field trip one thing leads to another and soon Andy is seeing things from a whole new angle.

When the x-ray vision enters the film, it’s immediately different than your childhood expectations of looking through walls and clothing. Andy sees the world as a psychedelic vision of brilliant colors; he’s not just looking through things, his whole perception has shifted. As the film progressed, I suddenly remembered a Roger Corman movie I watched last year called X: the Man with X-Ray Eyes. Obviously the titles are very similar, but it runs a lot deeper than that. In X, Ray Milland’s vision slowly progresses to the point of seeing colorful auras, and eventually he is unable to even perceive the world properly. He can see so much that he’s not able to see anything, or at least his mind can’t comprehend the level of everything it’s taking in. 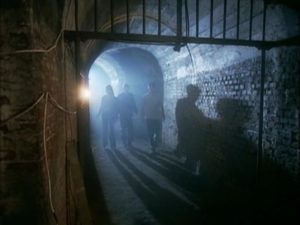 Andy’s sight follows a similar trajectory, but without the dark thread running through the Corman film. The Boy with the X-Ray Eyes is a family film after all, so we can’t have the kid reaching the depths of despair that Milland does. But there are certain hallmarks that recur, like the way the X-ray vision manifests, and being able to see through your eyelids when you close them. They even manage to tie in a medical angle, which was initially the focus in Corman’s film. These similarities never feel like cheap theft, though, they instead play like a loving homage, and the films are wildly different from one another in spite of these similarities. You could even think of The Boy with the X-Ray Eyes as something of a side sequel in the same universe, since the X-ray vision works in such a similar way.

As much as I thought this was a rather tame Moonbeam film, when I think back on it there are quite a lot of strange ingredients that would probably seem a lot odder and perhaps more interesting to a newcomer. For instance, Vectrocomp secures their doors with both a keypad code and a secondary lock that requires you to whistle a specific tune into it. Is that actually a thing? Andy also has a couple of super whiz-kid buddies that make a remote control for the X-ray goggles out of a standard TV remote, which is definitely a logical jump that many viewers won’t be able to accept. My favorite of these oddities comes when the kids infiltrate their second “secure” facility and they find a pair of BMX bikes in a storeroom. Of course, this leads to a bike chase around the hallways of the dilapidated, WWII-era underground army base. Apparently, Jeff Burr and Moonbeam were trying to keep this kind of “only in the ’80s” thing alive well past those wonderfully fun years of cinema. 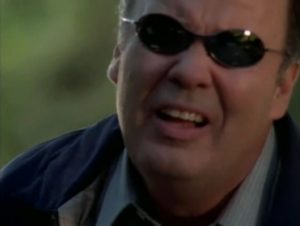 The Boy with the X-Ray Eyes isn’t great, but I kind of liked it for what it was. I loved X: The Man with X-Ray Eyes, so I enjoyed the parallels and ties that existed between the two films, as Burr’s film takes Corman’s ideas in new and interesting directions. I also grew up watching Saved by the Bell on Saturday mornings, so it was quite amusing to see Mr. Belding himself (Dennis Haskins) as the film’s anti-teen villain. He wanted revenge on those youngins! In any case, if you dig B-Movies this one might be a good one to try, but it could go either way.

Next time I get around to a Full Moon movie I’ll be watching another Moonbeam movie: 1994’s Beanstalk! See ya then!