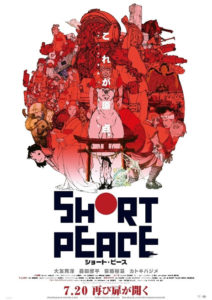 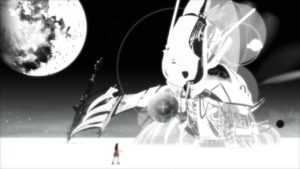 The opening segment by Koji Morimoto is probably the closest Short Peace comes to capturing that connection. It features a little girl playing hide and seek with a white rabbit. Yes, it’s time for Alice in Wonderland allusions. She wanders through a cornucopia of strange visuals that ramp up a feeling of otherworldly adventure. And her delighted joy at seeing all the sights unfold around her is a great setup for a collection of whimsical stories. It’s just too bad that most of these stories are neither very whimsical or otherworldly, so in retrospect, the opening feels rather inaccurate to the film’s content. Only the first story lives up to the opening setup.

“Possessions” by Shuhei Morita is a tale of a wandering craftsman in ancient Japan, who takes shelter from a storm in a run-down shrine. The story plays out like a fairy tale as the guy runs into mystical personifications of various tools that have been broken. Rather than fearing these spirits, he instead sees their potential and repairs them. I like the fairy tale format and it was probably the most effective of the stories, even though the CG here was occasionally stiff and clumsy compared to the other shorts. 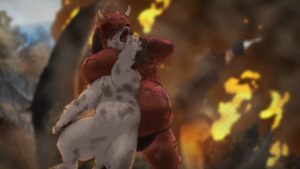 Katsuhiro Otomo’s personal addition to the collection, “Combustible,” is my least favorite of the stories. It’s pretty bland and slow moving. It’s set in feudal Japan and focuses on a woman and her childhood friend, who is also the target of her love. But she’s getting an arranged marriage, and the boy next door is running away to join the fire department. When she accidentally starts a fire, she decides to let it burn, hoping that her crush will come back to save her. As much as I liked the visual style of the short, I felt it was too plodding, and the main character too unsympathetic. In the end, all I could think was that the dumb bitch deserved what she got for setting the entire town on fire.

Hiroaki Ando’s piece, “Gambo,” is a good deal better. Also set in ancient Japan, it features a huge white bear that befriends a small girl and then gets in a huge wrestling match with a red giant, which might have been an alien that crash landed on Earth. It’s actually a pretty fun action scene, but that’s really all there is to this one. The story is just there to make the fight happen. As much fun as I had watching it, I couldn’t help but feel that the story was watered down to the point that it didn’t even matter. There were some scenes with a samurai trying to track down and kill the bear, but this whole subplot goes nowhere and the time could have been better spent on developing the main story.

The fourth and final story is “A Farewell to Weapons” by Hajime Katoki. I’m not at all familiar with A Farewell to Arms, so I don’t know how much this short follows that better-known story, and I can’t really compare the two. This short is set in the future, in a post-apocalyptic desert that used to be Tokyo. It follows a team of, um… soldiers? scavengers? corporate employees? Well, whoever they are, they’re trying to explore the bombed-out ruins and reclaim the weapons still buried there. Then they immediately doom the entire mission by discussing retirement before going in. So of course they get attacked by a giant robot tank that tries to kill them all. This one isn’t bad at all, though it was pretty unclear on who these guys are and what their goals are. It has some really cool scenes of urban combat that feel very modern considering our current era of the war on terror.

Honestly, there’s not a lot that’s wrong with these shorts. But for some reason they just didn’t click for me, even though I can’t really pin down very many genuine flaws with the film. It could just be my dislike of CG ruining it for me, but I think there’s more to it than that. The film’s box description plays up the awards and accolades of these films, and I think that’s where the problem is coming from. These shorts all feel like the anime equivalent of Oscar bait. They’re just trying too hard to be high art, when they really should’ve just tried to be good stories. But they are all very well-crafted, and if it sounds interesting to you, then maybe you will be more accepting of them than I was.