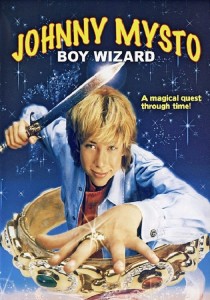 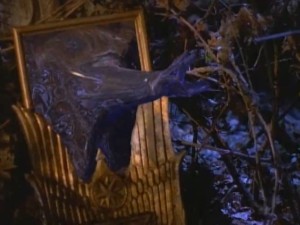 But when we meet Johnny he’s not really a boy wizard, he’s just a kid doing shoddy backyard magic shows. His idol is Blackmoor (Russ Tamblyn), a magician with a public access TV show, so in order to further his craft Johnny visits him for guidance. Blackmoor gifts him with a “book of secrets” — and what it contains remains a secret as it never comes up again — and a magic ring. As Johnny soon finds out, the ring contains real magic. So what do you think he does with this newfound power and talent? He puts on a better backyard show for the neighbors, of course!

Johnny Mysto: Boy Wizard is far less satisfying than other Moonbeam films — as a fantasy, as a comedy, as a film that teaches a lesson through dubious means… pretty much in every way. That being said, it remains entertaining and fun throughout, so it’s hard not to like this one regardless of its mediocrity. The film isn’t even that charming, and I didn’t like Johnny Mysto much; if I had to reach for a reason I guess I’d say that the strange elements went a long way for me. Even those aren’t especially strong, though, as the strangeness is dialed down from the usual Moonbeam level. I don’t know; the heart wants what it wants I guess. 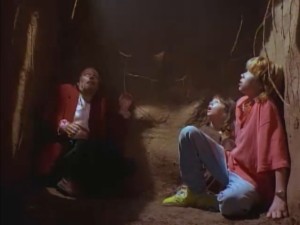 The FX work is primarily the standard Moonbeam low-budget CG work, but it’s surprisingly effective. There’s a few instances of morphing people that also got me thinking about how time changes the perception of FX. This movie came 10 years after Willow, the film that debuted digital morphing FX. In Willow, it was an amazing visual unlike anything we’d ever seen before. By the time of Johnny Mysto: Boy Wizard it’s merely a parlor trick in the arsenal of the low-budget computer artist. After something has been done, its power diminishes significantly, here to the point of being almost commonplace. So I suppose it’s only natural that even wonderfully effective FX — whether it’s stop-motion, practical makeup FX, digital morphing, whatever — will always be supplanted by something new in an effort to wow the viewer. Although at this point, FX artists have largely surpassed the simple “Wow” as their work is often undetectable; the wow only comes later when you see the FX reel and like 90% of what was on-screen was some kind of FX work. 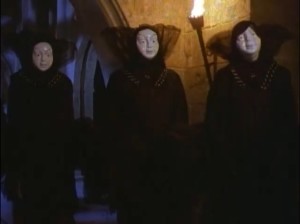 Johnny Mysto: Boy Wizard may be a middle-of-the-road Moonbeam film, but it’s still pretty entertaining. Everyone’s experience will vary, of course, but I imagine if you have any affinity for Moonbeam films, magic or films that loosely tie themselves to the King Arthur legend, then Johnny Mysto: Boy Wizard will satisfy. It’s fitting really, because one of the morals to this tale is that even if you don’t feel good enough for a given task, you should apply yourself and you just might succeed. Believe in Johnny Mysto: Boy Wizard, it’ll probably entertain you! And if you’re feeling down just remember the words of Johnny Mysto to his fallen idol Blackmoor, who is feeling a moment of unworthiness.

Next time I get around to a Full Moon movie I’ll be looking at Keith Walley’s Cut Throat AKA Scared! I’m not terribly excited after watching his previous film Speck, so wish me luck! See ya then!