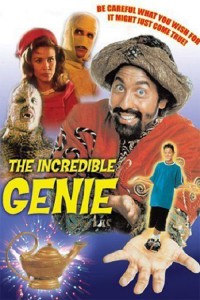 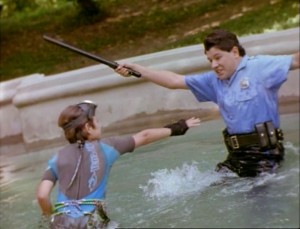 All this happens before our main character, Simon (Matt Koruba), makes his entrance by swimming around a wishing fountain in a wetsuit, collecting all the coins. A cop tries to stop him, but Simon pushes him into the water and makes his escape with the bag of loot. But you’ll never guess what he does with the money. He goes to his school cafeteria, drops the bag on the counter and asks to buy “a whole entire barrel of chocolate chip ice cream.” He then announces to the entire room that he bought them all ice cream, but y’know what? NOBODY WANTS HIS PRECOCIOUS, DELINQUENT NERD ICE CREAM. Yes, this guy is so low on the social totem pole that even the allure of free ice cream cannot win him even a single “friend.”

I could go on just describing the incredulity of The Incredible Genie, because the movie is a nearly constant string of stuff like this. But that’s not a review, now is it? What matters is that the magic lamp of the prologue eventually finds its way into Simon’s hands. The genie is anything but precise, so wishes go awry and hilarity ensues. Maybe my sense of humor is somewhat juvenile, but I found The Incredible Genie to be legitimately funny. With the Moonbeam films I expect some light chuckling because “I see what they did there,” and there is some of that, but I also had a number of full laughs as the film threw its varied plethora of gags and WTF charm at me. Even though it’s a family movie, the humor is really off-beat, too. For instance, there’s an offhand joke about one of the characters being the one that actually assassinated JFK, and this is probably the only genie movie where the genie has to shovel conjured shit. 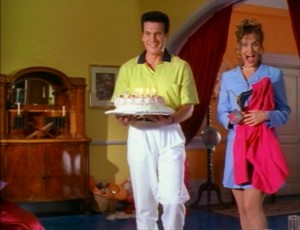 The filmmaking is on par with what you’d expect from a late ’90s Full Moon effort, which is to say it’s shot in Romania, there’s a few Romanian actors badly dubbed into English, there’s a castle, and it is directed without much in the way of visual flourishes. All the Moonbeam films are almost interchangeable visually, which is why I was so surprised mid-way through The Incredible Genie to see a 50-second long tracking shot! Whoa! It happens during a scene where the genie has “released all the people living inside Simon’s TV,” so it follows Simon as he walks through his house and sees gangsters and boxers and dancers and cops and aerobic instructors all doing their thing in his house. For a low-budget film to even attempt such an orchestrated shot is commendable, and while Goodfellas this ain’t, it’s still a great-looking shot that does everything it sets out to do.

The oddity of many of the film’s situations will stick with me for a while, but the main takeaway I had is how changed our main character is by the end of the film. When we first see him he’s literally stealing people’s wishes out of the fountain, without a second thought or regret. He’s a know-it-all who thinks he’s better than everyone else, and while he wants to have a friend, he’s unable to get outside of himself enough to actually be a friend to anyone. The script does a great job of making Simon annoying and unlikable, but by the end of the movie I was legitimately happy for him and how far he’d come.

Does this make The Incredible Genie a movie that everyone should see? Not in the slightest. It’s firmly on the B-Movie side of things, so only those kind of people need apply (you know who you are!).

Next time I get around to a Full Moon movie I’ll be going with the college horror film Delta Delta Die! See ya then!