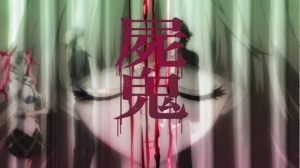 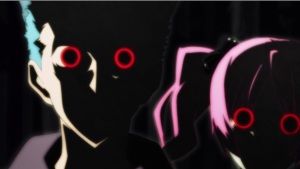 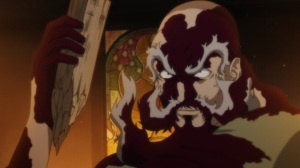 The story takes place in a small isolated mountain village surrounded by woods. A series of mysterious deaths start cropping up, leaving the only doctor in town at his wits’ end. I am hesitant to delve into the premise of the series, as one of the big reasons I enjoyed the first couple of episodes was that I had jumped into it completely blind. Figuring out just what the villagers were up against really added to the suspense of those early moments of the series, so if I’ve already convinced you that this is an excellent series worth watching, you may want to just stop right now and go watch it.

If you’re still with me, it becomes apparent that the new rich people in town are vampires, and they’re spreading. The dead people don’t stay dead very long, and soon the night is filled with bloodsucking dead friends and relatives threatening to wipe out everyone still alive. Their plan is one of subtlety and infiltration that lends itself well to the horror genre. Shiki‘s vampires are classical, with the traditional weaknesses that we are familiar with thanks to Dracula. It manages to take the comfortable and familiar style of vampires and make them feel fresh, vivid, and terrifying. The show constantly left me wondering how the characters would survive against the ever-growing horde. 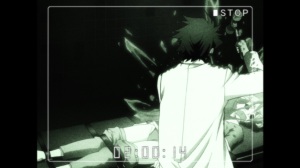 Most of the story revolves around three characters. One is Doctor Ozaki, who tries to find out why people keep dying, and why he can’t seem to do anything to stop it. Another is the doctor’s childhood friend Seishiro, a Buddhist monk who writes fantasy novels on the side. The third, Natsuno, is a high school kid, because all anime are required to have a high school kid as the main character. Natsuno’s parents moved to the village a few years back, and he hates it, constantly dreaming of the day when he can finally leave. Each of these characters gradually begins to realize just what the threat really is, and each responds to it in his own way.

Then there is the massive host of support characters that also fill very important roles. It is almost wrong to say that there are main characters in this series at all, because so many characters are vital to the story. In any given episode, the three main characters might play no more important a role than the minor characters do, or not even appear at all. You really get the sense that this is an entire village of people, not just a handful of colorful characters, and none of them are safe. Many of these characters’ stories end in tragedy, and then, once they come back to life, they suffer through still more tragedy. 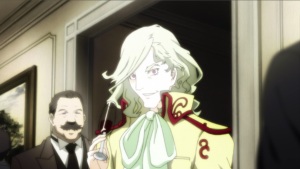 Shiki doesn’t limit itself to the humans’ perspective. It shows both the living and the dead with equal candor, and as the series goes on, the humans are often just as frightening as the vampires. But this doesn’t take a romantic view of vampires. Shiki shows everything, good and bad, without judgement, and it’s up to the viewer to decide who they agree with, or if they agree with anyone. There are no good guys here, and there are no bad guys. There are just people doing what they think they must to survive. That’s not to say that it ignores morality. It directly confronts the issues of becoming a monster to stop a monster, whether it is wrong to kill in order to survive, and if humans killing vampires to survive is no different from vampires killing humans to survive. It presents all of these moral quandaries and more, but what it does not present are answers. Only you can provide those. 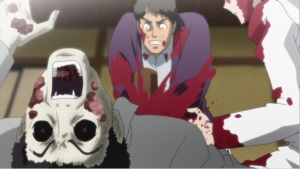 This can all get very confusing, though. Especially since the story isn’t always told chronologically. It often skips back to scenes you already know the outcome of to show you the same time period from someone else’s perspective. Often this perspective doesn’t even directly relate to the other events happening elsewhere. The complexity of the plot can be very daunting, so expect to keep track of a lot of little details that add to the bigger picture. The show also has a tendency to deal in cliffhangers, sometimes going an entire episode without resolving them. Normally this would bug the hell out of me, but the show handles it with such subtlety that I barely noticed. It’s certainly a testament to just how much is going on in the story, and just how well it is put together.

The series also maintains a high level of production quality. The animation is smooth and detailed. Shiki really shows just what the modern age of digital animation is capable of if it decides not to cram in CG everywhere. The visual style of the series also stands out. Bright, vivid colors contrast with muted browns and dark, dank environments, and it all combines to make a really impressive atmosphere of supernatural dread. And I should make mention of the music, too, which also fits perfectly with the mood and events of the series.

There are certainly some oddities as well. Anime always uses exaggerated characters and designs, but Shiki definitely goes overboard. Some of the characters massively overreact to just about everything. I think this might have been an attempt to compensate for the small parts that many characters have. It’s as if they tried to replace depth of character with intensity of character, which doesn’t really work. Hairstyles are another aspect of the series done to extreme absurdity. I don’t think I have ever seen an anime with such bizarre hair, or fashion sense in general for that matter. This will probably drive off some viewers who will be unable to take it seriously, but I was able to just laugh at it and enjoy it. There are also some awkward plot holes, and I would have preferred a bit more elaboration in the epilogue, but these didn’t hurt the series anywhere near enough to knock me out of its spell.

I don’t really care for horror. It’s not often that I get much out of it. But Shiki completely won me over within a few episodes. I guess it goes to show that it’s not what the story is, but how well it’s told. And Shiki spins a mesmerizing tale of people confronting their worst nightmares come to life.