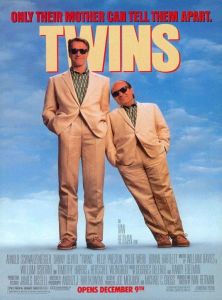 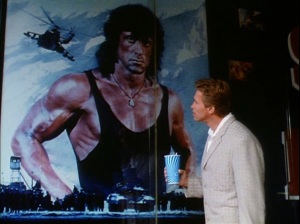 So what is it about Twins that makes it such an entertaining piece of ’80s cinema? Well, Arnold is a big draw for me, of course, but teaming him with Danny DeVito somehow makes Arnold even better. This film marked a huge shift in Arnold’s career, too. He had made his name in action films, but no matter how much we all love them now, they were not the box-office explosions that Twins and Arnold’s later films were. It was Twins that put Arnold on the box-office map as a truly bankable star able to carry multiple genres. While many love to rip Arnold for being a bad actor, I prefer to pump him up with words like hilarious, excellent and charming. He really was born to be on-screen. I’m sure his heart was filled with happiness at achieving his acting dreams on such a large scale, and that feeling of pure infectious joy is evident in the silly smile that covers his face throughout nearly the entire runtime of Twins.

But like I mentioned, it’s not all about Arnold. Danny DeVito brings the perfect yang to Arnold’s yin; by the end of the film, not only did I believe that they were twins separated at birth, I actually wanted it to be true. They are a perfect comedy team here, so I’m definitely looking forward to my re-watch of Junior (in which they both star and re-team with director Ivan Reitman) whenever I get down to that one. The two female leads (Chole Webb & Kelly Preston) are equally important to the mix, adding additional moments of tenderness and comedy in a film full of them. Chole Webb is especially charming, and I can’t believe I never realized how flat-out gorgeous Kelly Preston is. Her character is little more than a pretty face for Arnold to fall for, but I suppose that’s to be expected in a film like this which feels like it’s aimed predominantly at men. Which, you could argue, is the problem with most Hollywood pictures, if you want to get technical. 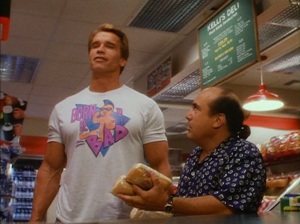 Other than the general likeability of the actors and the situations the film puts them into, it’s hard to come up with exactly why I enjoyed Twins as much as I did. The premise is superb, and the theme of reconnecting and creating family is handled well, pulling the right heartstrings whenever it should. Really, that should be enough for a movie to be recommended on, no? What else do you need? Arnold sings Yakety Yak, drives a car on two wheels AND his twin brother is Danny DeVito? You had me at Arnold.

Twins is definitely a dated film. Everything about it, from its outlandish premise to its lighthearted fun attitude towards violence, absolutely oozes of the 1980s. For some, this will make Twins a grueling experience that will likely cause them to agree with Arnold’s character, Julius, when he chastises his twin brother Vincent for having “no respect for logic.” That may be true, but to enjoy films like this it takes a different kind of respect… a respect for ’80s logic. Trust me, not only will it help you enjoy some of the most downright entertaining movies ever made, it just might change your life. OK, OK, I got a little wrapped up in the mood of the 1980s, where cheap entertainment always came with a side of heart, but it’s true. Embrace the power of simple entertainment. Reconnect with the childlike joy you once experienced, when plot holes went over your head and your reflexes were never fast enough to even notice them (let alone catch them). Twins may not be a great movie, but it’s damn fine entertainment. And really, that’s all that matters.

With Twins in the bag, the ’80s are complete for Arnold! Next up in this chronological journey through the films of Arnold Schwarzenegger is Total Recall, blasting us into the ’90s! See ya then!