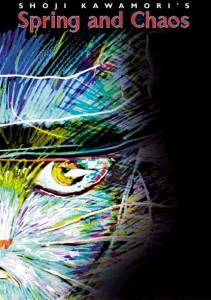 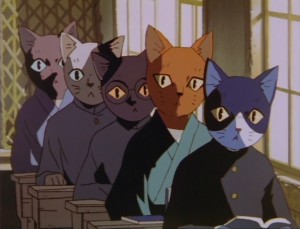 I imagine that all the mecha action fans were rather disappointed when they found a biography filled with cat people. I think I was one of them, though I knew not to expect an action adventure film. I remember thinking it was rather boring at the time, and my DVD has been sitting around gathering dust since then. So, what do I think of it now? Well, it’s still a little bit boring, but it does get better. As it moved along I became more invested in Miyazawa and his struggles. The film takes a rather uninformative approach to Miyazawa’s life, illustrating his character rather than explaining facts. It’s like watching a biography of Abraham Lincoln that never touches on the Civil War. Why? Because we’re already supposed to know this stuff. The film assumes a basic familiarity with Miyazawa’s history, which is common knowledge in Japan.

That alone makes this a rather confusing film, but then it has to add cat people to the deal. The film is very fantastical and surreal, filled with hallucinatory images that draw from the imagery of Miyazawa’s own fictional tales. Strange clockwork constructions and flying trains (which no doubt inspired Leiji Matsumoto’s Galaxy Express series) fill the film with awe and wonder. To go along with the magical feel, all the characters are anthropomorphic animals, an idea probably inspired by the film adaptation of Miyazawa’s most famous work, Night on the Galactic Railroad. Most of the people are cats, but some of the others are dogs or other animals. It becomes so normal that when Miyazawa hallucinates a human woman, it only adds to the weirdness. The music is an amazing amplification of this as well. It really adds a whole new layer to the bizarre visuals and excels at making the events feel both epic and otherworldly. 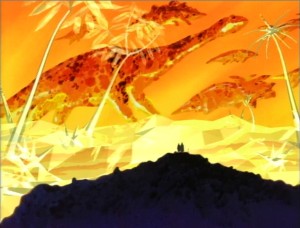 The fantastic images are really amazing, but they are also one of the most disappointing aspects of the film. Most of them are done in CG, and the mid-’90s was definitely not a good time for CG. As a result, the film actually looks rather ugly, which is one of the biggest reasons I disliked it so much the first time I saw it. This time I allowed myself to ignore the CG at least to a small extent and just enjoy the strange visuals, but there is no denying that the CG gives the film a massive downgrade.

The film suffers from a rather odd storytelling structure, too. It’s a dramatization, and thus is trying to be a story, not just a collection of facts. But the story feels very inconclusive. It’s unclear whether the film ends with his death, or just a shift in his worldview. It’s apparent that the climax is meant to be an important revelation for Miyazawa and perhaps the viewer as well. But whatever the message was is still lost on me. This makes the film feel very incomplete to me, and its conclusion seems underwhelming. All the awe and wonder that fills the film is just as confusing at the end as it is in the beginning, and that leaves me with a feeling that it was all a waste of time. Maybe I’m being too harsh here. Maybe I just don’t get it. But I can’t give you any answers I don’t have. My only conclusion to this film is, “Huh?”

The film certainly isn’t all bad. It does have some great ideas and is a very unusual portrait of an equally unusual man. I can’t say the film added up for me, but it’s definitely worth watching for anyone interested in Kenji Miyazawa. It’s also worth checking out for Shoji Kawamori fans as one of the most curious additions to his filmography. Who knows, maybe it’ll make more sense to you than it did to me.