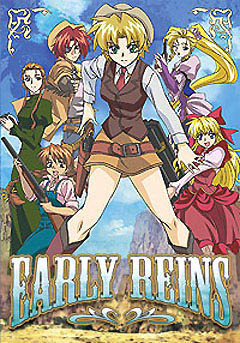 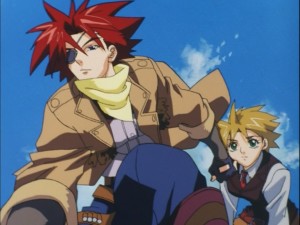 The plot involves a girl named Margaret who wants to be a sheriff of some random town that never gets mentioned. On her train ride to wherever, bandits attack and rob everyone. Bastards. They also try to rape the girls on board, but one of the young ladies is a total badass and kills the lot of them. Once they start investigating, it turns out the army is using the train to transport a bunch of guns and a heaping pile of gold, and every outlaw around wants a piece of it. So the gals arm up and try to keep the train safe as a huge gang of bandits unleashes a coordinated attack on the train.

That’s about it. It tries to be a bit clever at the end and throw a few curveballs at you, but there’s nothing all that inspired or original about it. The whole film is one big battle aboard a train. There’s nothing wrong with that, really. There’s just nothing all that interesting about it either. The action isn’t particularly exciting or engaging, but it didn’t put me to sleep. If it had gone on much longer it probably would have, though. 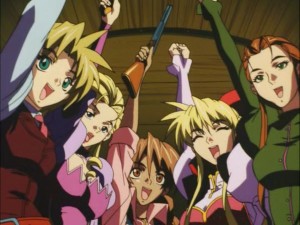 The film does lose track of a few things here and there. Margaret has a small subplot about never having killed before and the psychological toll it takes to do so, but after she takes out her first asshole the film pretty much forgets all about that. It’s not like most of the other girls have killed either, but they don’t even bat an eye at mowing down a mob of bandits. The film also makes it clear that the army was transporting guns, but not ammo. After they mention it, though, it’s pretty much forgotten. They only brought one clip of ammo for the gatling gun? No problem. It’ll last the whole movie.

I don’t really want to bag on Early Reins for its animation. It’s a low-budget title, and it has animation to match. I can’t really fault it for that. The CG is ugly as sin, too. Again, low budget. And it was made in 2003. There’s no way the CG was going to be any good even if they had money to throw around. I feel like the filmmakers knew they had nothing to work with and needed to do something to make the movie interesting, so they decided to at least gave it a unique setting if nothing else.

It’s at the bottom end of average, but it doesn’t do anything horrible enough to be called bad. So I’ve got practically nothing to talk about. It’s not really worth tracking down, but if you like anime and you like westerns, well… Early Reins does indeed exist.