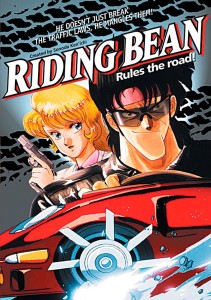 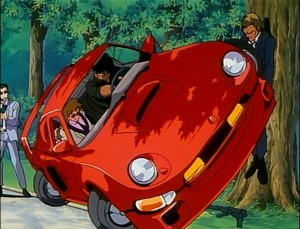 With a violent lunatic as the hero, you need to have a really vile bad guy to keep you rooting for the “good guy.” And Riding Bean has one hell of a villain, that’s for sure. Semmerling is a murderous, devious master of disguise and a lesbian child molester on top of that. God damn, I though this was a lighthearted comedy. To its credit, the film never portrays the situation in an exploitative or gratuitous manner and always makes it clear that Semmerling is ruining this poor girl’s life, but it is incredibly disconcerting to have such a huge juxtaposition of goofy antics with such serious themes buried within.

Semmerling’s plans are so ridiculous and ballsy that I have to call her a demented genius. They are quite clever, and the film’s ability to juggle the rather complicated twists and still be easy to understand with less than an hour runtime is an admirable feat of storytelling. Semmerling’s main plan is to use Bean as a scapegoat for her crimes, but we all know what’s going to happen when you double cross a badass anti-hero. Naturally, Bean is pissed and lets loose a rampage across the streets of Chicago chasing down Semmerling while the police in turn chase after him. 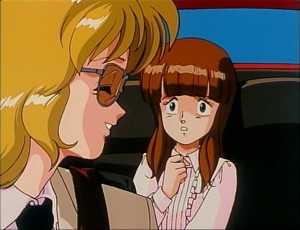 Obviously Semmerling has underestimated Bean’s Hulk-like strength, but it’s a pretty easy mistake for the audience to make as well. There are some signs early in the film that Bean is somewhat superhuman, but those signs are so comedic that it’s easy to write them off as simple jokes that have nothing to do with the plot. That would be an incorrect assumption. As the film goes on, it becomes increasingly obvious that Bean is damn near indestructible. You might be tempted to think he has a bulletproof coat or something, but no. Bean himself is apparently bulletproof all on his own. By the time he rips a closed car door off its hinges with his bare hands, it’s pretty obvious that we’ve veered away from even the semblance of realism.

This kind of gives a feeling of a bait and switch. You think you’re watching a car chase film and suddenly find yourself in a superhero film. Riding Bean definitely has some trouble keeping a consistent theme through the story, but this rapid jerking around is something I find rather endearing about it. I especially love that no explanation for Bean’s abilities are even mentioned. He’s an unstoppable monster. The film makes no excuses. Take it or leave it.

While a lot of people might find this too inconsistent to be enjoyable, I prefer to call it varied and flavorful. It’s a cornucopia of madness, and tons of fun if you’re willing to let it go where it wants without questioning it.