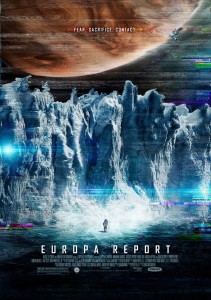 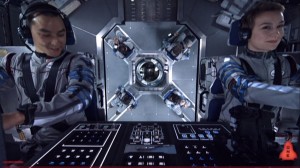 The basics of the story are as you would expect in a space exploration film. After discoveries about some possible water under the icy surface of Jupiter’s moon Europa, a team of rocket scientists put together a rocket for a team of astronauts to explore and bring back samples of the surface. The mission will take the team about two years to reach their destination, but with stars in their eyes (and presumably Star Trek in their hearts and minds) our guys and girls head off into the great unknown. That’s all you need to know about the movie. It’s not an action film, it’s a slow-moving document of a fictional, realistic space exploration.

If you’re engaged as intended with the film, Europa Report will also deliver a good amount of thrills and tension. We’ve all seen the crew of Star Trek land on an unknown world, but they are fairly advanced and the sense of danger is largely minimal. When the Europa pod makes a landing attempt, I had chills. I’ve always been fascinated with science fiction and space exploration, but until this moment in the film I had never considered what it must have actually been like for the crew of the first moon landing (provided you believe it happened, of course). It takes a while for the film to build towards these moments, but they are very strong when they do come around.

So why only three stars? Well, as much as I respect the quality of the production design and how technically sound the whole film feels, the first half is poorly paced and needlessly choppy. It jumps around by months at a time, leaving the viewer to wonder if what we’re seeing is before, well-after or only the next moment compared to the previous scene. I’m sure this was done to help guide us through the slower sections of the film, giving us some sense of mystery. A simple, linear telling of the events would admittedly be even slower and more tedious. It’s hard to call this a true flaw by the time the credits roll, after its purpose is understood, I just feel like this section could have been stronger. Perhaps I’m nitpicking, and I feel bad for even bringing it up, but it was my experience and it definitely hampered my engagement quite a bit in the beginning.

Europa Report is a very good film, though, make no mistake. It’s for the select group of people who find the idea of space travel fascinating… so if that’s you definitely give this one a spin. All others should maybe look elsewhere, but why not be adventurous and explore something new?