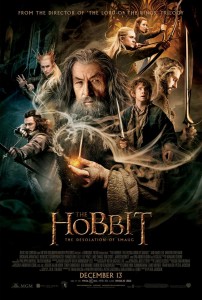 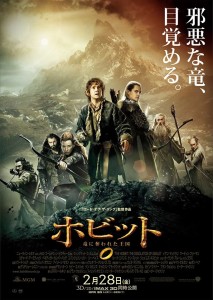 Storywise, if you’re reading this I’m going to assume you know what’s going on. Like the book it is based on, the Hobbit films are all about the thrill of the journey and the fun of adventuring, so there are a myriad of trials and tribulations for Bilbo and the dwarves to get through on their way to the Lonely Mountain. This seems to be the major point of contention around these films (that they don’t just get on with it), but anyone arguing this as a valid criticism is missing the point. A fantasy novel adaptation allowed such room to breathe as Jackson is given here is an absolute joy for the fans. I can’t begin to imagine how inferior a two-film version would be and I’m glad that the LOTR films were successful enough to allow for The Hobbit to deliver extended fantasy fun of a three-film magnitude.

In terms of action, The Desolation of Smaug is much different that what was seen in An Unexpected Journey. The first film’s struggles felt more tense, but the ones here are light and relentlessly entertaining. And oddly enough, the best bits seems to be creations added entirely by Jackson and the screenwriting team. Everyone will have their own favorites, of course, but for me these were the slick elven combat and the incredible finale inside Erebor. As for the finale I will say this: Watch it and try to contain your shit-eating grin, it’s not possible! I don’t want to discuss specifics on the finale, so I’ll just let leave it at that.  The elves on the other hand…

If you thought Legolas was badass in the Lord of the Rings films, then you need to see The Desolation of Smaug. Not only are we treated to Legolas pulling out all the combat stops, Jackson and co. have added a female elf to the story, Tauriel (Evangeline Lilly), and she is a fierce competitor to Legolas for the “Most Badass Elven Warrior” award. The choreography for their movements is so precise, superhuman and impressive, it’s like the elves can see the battle five moves ahead and are merely going through the obvious motions to keep it flowing. It’s something that comes up throughout Lord of the Rings in small bursts, but it is never allowed to flourish like it is in The Desolation of Smaug. Is is too late for Jackson to be talked into making a movie solely about the elves? These elven warriors also contribute a good majority of those clever decapitations, bringing my delight during their battles to an absolute fever-pitch.

The Desolation of Smaug is a grand adventure designed first and foremost to thrill and delight. Where An Unexpected Journey brought its audiences the wonderment of being out in the world on a journey for the first time, The Desolation of Smaug shatters the dream and shows us just how dangerous and sinister the world beyond the Shire really is. The ties to Lord of the Rings are shaping up nicely as well, providing us with an interesting context to the events in those films. True, none of that is actually told in the pages of The Hobbit, but to simply make a joyous version of The Hobbit that strictly adheres to the book and ignores Lord of the Rings would be an absolute travesty. Peter Jackson’s The Hobbit is excellent fun, and is exactly what a prequel should be. I eagerly await next December and the release of the final installment.