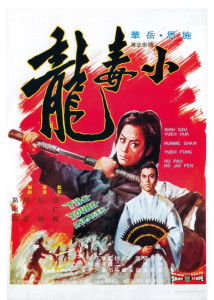 This decision makes The Young Avenger a much better film than it could have been without it. There are still quite a few events that “occur” in the dialogue, but by elaborating on the genesis of the revenge so deeply, it makes the build up to the finale all that more exciting. Through this extended flashback, we have a great knowledge of what has occurred, and also what is coming. We know the inevitable clash will be fierce, as both the villain and the heroes are formidable and skilled warriors.

So in different ways, The Young Avenger is both notable and interesting in the way it presents itself, and not all that different from many previous wuxia films. It has the look and feel of an early ’70s Shaw Brothers swordplay film, but it is also part throwback to the genre’s roots in Huangmei opera, complete with a traveling song as our hero sets out to seek her destiny. I imagine, like many other directors that have included similar nods to past films, that director Griffin Yueh Feng missed the romanticism and wonder of the early wuxia films. But instead of creating a simple throwback, he has made a nice amalgamation of the two styles.

On the action front, The Young Avenger is quite thrilling and entertaining. By this point in time it feels like the Shaw Brothers had a good quality baseline for fight choreography, so even films without standout choreography still stand tall over previous films that were once impressive. The Young Avenger has fights of this nature; they are great in the moment, but not all that memorable outside of the movie. But that doesn’t stop the final act from being chock full of incredibly fun fights. They aren’t all that varied in their approach, but little things like Fan Mei-Sheng playing a hunchback and Yueh Hua wielding an iron fan go a long way.

In my other Shaw reviews I’ve written a lot about how much I enjoy Yueh Hua, and he’s again fantastic here in a limited role. But the real star of the show is Shih Szu. This is exactly the type of film that would’ve starred Cheng Pei-Pei a few years earlier, and Shih Szu is without a doubt a worthy successor to Cheng’s legacy. Shih Szu not only handles herself ably during the fight sequences, she is able to convey great emotions when needed to further the film’s dramatic aspirations. I’ve liked her in the few films I’ve seen her in before this, but in The Young Avenger she made a true fan out of me. This is easily her best performance up to this point, but that’s not saying a lot as it was only her fourth film of more than 50.

The Young Avenger does miss a couple of great opportunities to make it stand out from the crowd, but regardless the film gets the job done. At only 81 minutes, it is lean and to the point, conveying a simple, well-told story exceptionally well. It’s not great, but it is very good, and those in search of a fun wuxia tale of revenge will likely enjoy this one a lot.

Next up in this chronological jaunt through the Shaw Brothers Martial Arts catalog is Cheng Chang Ho’s King Boxer AKA Five Fingers of Death, the Shaw Brothers movie that broke through to America and kicked off the ’70s kung fu craze! See ya then!