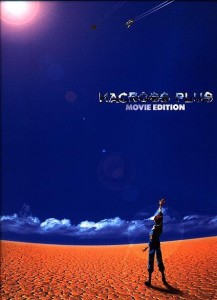 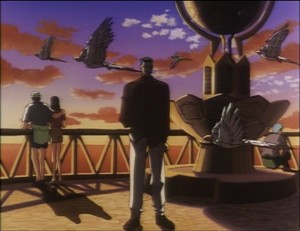 Rather than the usual epic space warfare, Macross Plus tells a more small-scale story of personal relationships, but like everything else in the Macross franchise, it still centers on a love triangle. It doesn’t forget the giant shape-changing robots either. It just takes a less sweeping approach to it. The film tells the story of two ace fighter pilots, Guld and Isamu. Rather than having them blow up aliens, they are assigned as test pilots for two experimental Valkyrie fighters. Guld’s is even mind-controlled for extra sci-fi coolness, and he sits in a yoga pose with his eyes closed while flying it. The problem is both of these guys hate each other over a mutual high school sweetheart, Myung. Myung had dreams of becoming a pop star, but has since settled for being the producer for Sharon Apple, a new advanced AI system that actually is a pop star. Of course the idea of a robot as a celebrity musician would have come from Japan.

Macross Plus manages to touch on all the fundamental themes of Macross while still driving the series into brand new territory. It’s got plenty of mecha action as Isamu and Guld take their rivalry into the flight tests, and the relationships have a tremendous amount of depth and complexity. The animation is also top-notch for the era.  Sharon’s holographic concerts are mesmerizing, and the aerial combat is exhilarating.  It also features one of the earliest soundtracks composed by Yoko Kanno (no relation to Yoko Ono), who has made many great anime soundtracks since. 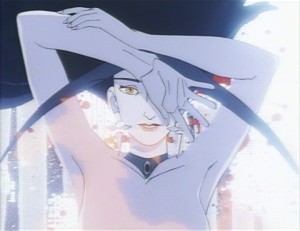 It’s a fantastic anime title in either series or movie format, but I’m still going to side with the series as the superior version. I didn’t want to make this review a comparison of the two, but considering how ingrained the series is in my head, I can only think of the film in comparison to the series. The plot alterations may jar me a bit, but I enjoyed them a lot, especially the way the movie edition introduces the characters and the setting. I think the difference has to do with the pacing of a film rather than the pacing of a series, and both versions of the story do extremely well for their respective formats, though some of the editing in the movie edition is a tad clumsy. But what leaves me the most unhappy with the film is the character focus.

The film pays more attention to Lucy, a rather minor character in the series, but these extra bits involving her don’t make her any more important to the story, nor do they add any more depth to her character. Worse, it seems to take time away from the more interesting characters, like Yang, the young genius computer hacker that designed Isamu’s fighter and also has a mad obsession with hacking into Sharon’s AI. And Myung, despite being one of the main three in the love triangle, feels a bit short-changed. The series runs at about three hours while the film is only two, so there’s less time to go around for everyone, but I didn’t really agree with where the emphasis was after those cuts. And even though new scenes were added, they mostly failed to add anything worthwhile. This is especially true at the end of the film where more dialog was added after the finale, but it only saps the emotional strength from the ending with cheesy lines meant to explain things that were already obvious. Meanwhile, parts of the story that were vague even in the series, such as the hypnotism at the end, are clipped down and even more vague. 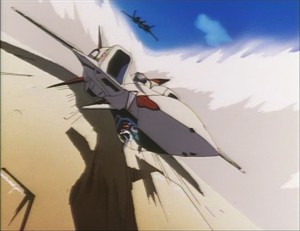 There are a few good bits added in, though. Mostly regarding Guld’s showdown with a third experimental fighter, which has a more satisfying conclusion than the somewhat abrupt treatment it had in the series. But even that sequence had a small measure of eye-rolling melodrama. Sharon’s concert at the end also gets some lovely new bits added in, but it also adds in some unwelcome CG, which brings me to one of the odd aspects of this film: I actually don’t mind most of the CG in it. A lot of my acceptance is just because I loved the series before I grew to hate CG, and that lovely coating of nostalgia keeps me from scoffing at it. But it also used the CG well. It was mostly mixed into the actual computer displays in the film, or seeing Guld’s vision of what his mind-controlled jet sends into his brain. It makes perfect sense that he would be perceiving the world as rendered by a computer model. But the stuff added into Sharon’s concert is pretty dire, especially when compared to the beautiful background art that was on display just a few minutes before.

In the end, all my complaining is mere nit-picking about the two different versions. They are both great fun to watch, and while I prefer the series, the movie edition is still packed with great action and an equally great story. Any anime fan should watch at least one of the two versions.

And while I’m really reviewing the film itself, not the packaging, I feel I should mention the crappy American DVD release of the movie edition. It was clearly pulled from a VHS master, one that already had the subtitles applied. So the picture quality is low, and the subtitles are part of the video itself. The series edition, though far from the best video quality out there, is quite superior to the movie edition, so even if my review didn’t convince you to go for the series, maybe that will.