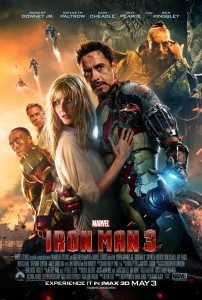 As is to be expected, Robert Downey Jr. is once again superb as Tony Stark. They really couldn’t have picked a better man for the role. I’m sure at some level he’s tired of doing the same old thing over and over, but this never shows on-screen. Robert Downey Jr. is Iron Man, and any future actor stepping into the role will have a lot to live up to. I know Downey Jr. has a few more films in his contract, but it’s hard to shake the feeling that Iron Man 3 is the end of the solo Iron Man films for Robert Downey Jr. Perhaps that’s an incorrect assumption — and I’m sure the execs would LOVE many more of these — but there’s just a finality and a farewell aspect to the end credits that make it feel like the end of a trilogy. So perhaps it’s just that: the end of this arc and the beginning of another.

I’d also be remiss not to mention the supporting cast. Ben Kingsley creates a persona on-screen that is absolutely terrifying, perhaps because it feels like he could be a real person in our world. The allusions to Osama Bin Laden are clear, and they work well (although actively using the built-in fear of the American audience does seem kind of easy and cheap). Guy Pearce is equally great at creating a memorable character, and his scenes are among the best in the film. He’s long been a favorite of mine, so it’s nice to see him get such a high-profile, meaty role. Gwyneth Paltrow and Rebecca Hall also do a great job, although I feel like Hall’s character was more of a story device than a true character. But like Pearce, I like her a lot and it’s great to see her in such a high-profile movie.

My one real complaint isn’t much of a complaint, and it stems directly from my youth as a comic book reader. I was never much of an Iron Man fan (in terms of book buying) but the one thing about his books that always intrigued me was the character of the Mandarin. Yes, even then I gravitated towards Asian-influenced things. Anyway, I was really looking forward to the introduction of the character as he’s one of Iron Man’s major villains throughout the years, much like Loki in the Thor series. But while the film at hand works great as is, I don’t think it does justice to The Mandarin’s original character at all. I don’t really wish that they did anything different, but it just would’ve been nice to see some of the original Asian influence or his neato rings. But whatever… Iron Man 3 was a total blast, and I welcome the coming wave of Marvel’s Phase 2 films.