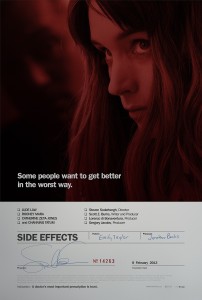 Steven Soderbergh is such a smart, subtle filmmaker, and it’s these qualities that kept me interested the most in Side Effects. He never holds your hand, instead he carefully arranges the pieces and allows the audience to be an active participant in the unraveling. Unfortunately, not everything in the film is as subtle as I’d have liked it to be, with one pulpy plot line feeling especially cheap and pandering. I don’t want to reveal anything by talking in specifics, but this element felt needlessly gratuitous and below Soderbergh’s talents. Even though this is just a minor piece to the Side Effects puzzle, it ultimately made me think less of the film. The sad thing is that it could have easily been handled differently without affecting the story, to much more artistically pleasing results. 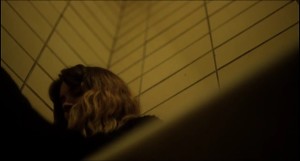 Soderbergh always coaxes good performances from his actors, but I thought Jude Law and Catherine Zeta-Jones were rather unbelievable as doctors. Jude Law recalls something of his investigative blogger character from Soderbergh’s Contagion instead of feeling especially doctor-like. Zeta-Jones was even less believable, and I think unknown actors would’ve fit the movie a lot more. I understand that doesn’t put butts in seats, though, and I suppose that makes this more of a mainstream Soderbergh movie than an indie one (although it doesn’t feel mainstream AT ALL).

While I really enjoyed Side Effects, I think it’d be a shame if Soderbergh followed through with his self-imposed retirement and let this be his final theatrical release. I hope he decides to pick up the camera at some point in the future. He’s too good a talent to just pack it in already, crafting some of the most original and thoughtful films of the modern era. Side Effects isn’t exactly representative of that, but it’s still pretty good and different from other 2013 offerings.