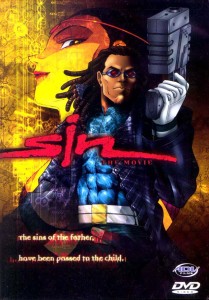 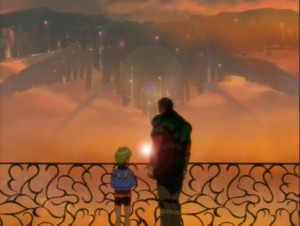 Now it’s down to the cyborg John Blade to find out where the monster came from and why it was abducting a little girl. The plot thickens when the dead guy’s sister shows up blaming Blade for her brother’s death. From here on out, things get pretty generic pretty fast. It has an equally fast pace that manages to keep ahead of the boredom and predictability for a while, but in the end the generic nature of the plot wins out.

One of the biggest reasons for its failure is the bad animation. I’m used to low-budget anime and the unimpressive animation that comes with it. Usually I don’t even bother mentioning it in my reviews, but here it transcended simple low quality and became something just plain awful. This film was made at the cusp of digital animation, and so the effects are predictably cheap looking, but that’s not all. It also uses old-fashioned analog animation sequences mixed with the newer digital animation that is today’s industry standard. It’s as if they couldn’t make up their minds which one would be better, so they just used both thinking it would turn out well. It didn’t. Half the scenes have the soft edge of old animation, and the others have the crisp (and in this case, unfortunately pixelated) look of digital animation. 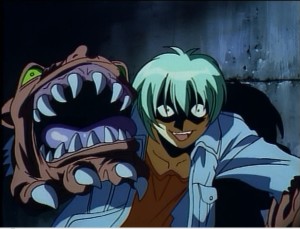 To give it a live-action equivalent: it’s like a movie shot with old film stock and all the grain that goes along with it, but then mixing in shots done with digital film. Not for any purpose mind you — like illustrating a flashback — but simply at random, switching back and forth between different shots in the same scene. It creates a hodgepodge of clashing visuals when it should have some kind of uniformity. It all comes together as a disjointed mess. Add this to the very low quality of the animation in the first place, and you get a film that really looks like shit.

If the animation had been better, or at least consistent, I might have enjoyed the whole experience as a mindless monster action movie. Unfortunately, it left me bored by the end of it all, and disgusted by the monsters for the entirely wrong reasons. I was hopeful in the beginning, but even that substantially better part of the film has nothing memorable to give it any reason to go watch it. Tallying it all up, I’m afraid I still have to add it to the huge pile of video game movie failures. But at least it’s somewhere near the top of that pile.