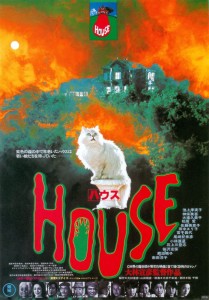 In the name of all that is right and good in the world, what did I just watch? Nobuhiko Obayashi’s House is a surreal masterpiece that is constantly taking you off-guard with odd juxtapositions and abstract composition. Not to mention all the nutso goings-on.  It’s got to be one of the most unusual horror movies ever made, so much so that it barely resembles a horror film most of the time. A near-complete subversion of the genre, House is definitely a film worthy of a look, especially for those that dig surreal cinema, Japanese WTF cinema, or white, fluffy cats.

At the base of all that surrealism is one of the most traditional horror stories in the book. Seven schoolgirls are off on summer vacation, and after their initial plans go awry, they all decide to visit Gorgeous’s aunt. Gorgeous’s mother died many years ago, and she hopes that by reconnecting with her aunt she can feel a bit closer to her. When the girls arrive in the hometown of Gorgeous’s mother, they find that their destination is a huge mansion on the top of a hill. And it’s a spooky looking mansion, too. 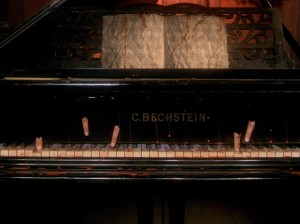 So that’s the basic premise, and while a lot of the resulting story does play out rather straightforward and linear, the mortar in-between the story bricks is anything but. Nearly every scene is heavily punctuated with surreal touches, and even the ones that aren’t visually flashy have something strange about them to keep you on your toes. In this way, House is something of an indescribable film, a movie that defies every genre classification you could lay upon it. It’s as equal parts horror, comedy and abstract experimentalism as it is a supernatural ghost story, a coming-of-age tale, and a symbolic representation of the frustration women feel with men that continually let them down. I didn’t exactly fall head over heels for the film, but it’s a powerfully unique movie that requires multiple viewings to really wrap your brain around everything going on.

In the spirit of respect, I feel that talking in any real specifics will adversely affect the experience of those that might see the film based on my review. I will say that there are things in this film that will stay with you, not because they’re anything horrific or disturbing, but because they are images so striking and perfectly captured that they will imprint themselves on your psyche. Unfortunately, my cat looks a fair bit like the cat in the film, so at least for a little while I’m going to be somewhat wary of her movements around me. You can never be too careful. 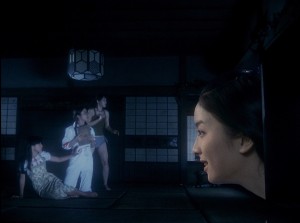 And this attitude really captures the spirit of the film well. It’s not a scary film by any means, but it is one that gets deep under your skin through repeated assault. The tone is always a strange, slightly comic melancholy, so that does a good job of tricking your brain into thinking that nothing bad is going to happen. So when the shifts come on suddenly, they are quite surprising, as the rest of the film moves about dreamily, lulling us to complacency with recurring melodies.

House is a trip. Go into this one without expectations of anything. Just try to roll with its shifts, and it’ll take you on a ride unlike anything else out there.