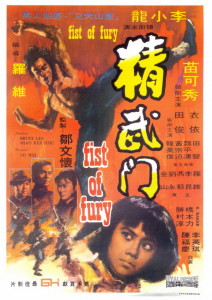 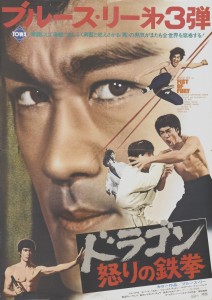 But Ho Yuan Chia was a teacher who advised that the martial arts should be used for personal enrichment and fitness, not vengeance or fighting between schools. Even though Chen Zhen (Bruce Lee) is his master’s favorite and best pupil, he blatantly disregards these precepts taught by his master. Provoked by the nearby Japanese school responsible for Ho’s death, Chen Zhen goes to teach them a lesson. This is the point of no return for him, as vengeance is a vicious, neverending cycle.

This creates a tortured quality to Fist of Fury that hangs over every awesome display of martial arts. I have a hard time fully enjoying the fights, as with each passing moment I hoped that something or someone would alter Chen’s course. I saw his potential as a figure of good, even though I already know how the movie ends. I think the hardest thing to get over is just how widespread his brand of vengeance is. He doesn’t just attack the people responsible, he attacks any and every Japanese he comes into contact with. This is where it’s supposed to be a rousing, patriotic film, but as a Westerner I couldn’t help but focus on the fact that if he had just let it go, he could have saved himself and every one around him a considerable amount of mayhem, destruction and grief. He is a force of nature, wreaking furious havoc across Shanghai, and there’s no changing him. 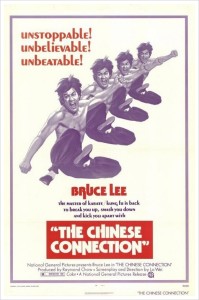 Now forgetting all of that, Bruce Lee is simply incredible to watch in this movie. The martial arts sequences are very well-constructed, and always pop with excitement. There’s just no way around it, Bruce Lee is a total badass. In the world of martial arts films, where a bigger movement is usually a better one, where strikes are overplayed for the camera to fake a real hit, Bruce Lee imbues every one of his strikes with such force and emotion that it is instantly believable that he is laying waste to top men with a couple of quick strikes. There’s a reason why his films created a frenzy. The fights are also varied, allowing Bruce to go up against a number of different types of attacks and weapons. It’s fun to see how he reacts in a given situation, bringing to life his “style without style” Jeet Kune Do training philosophy.

Also: nunchucks! It might sound strange, but it had slipped my mind that Bruce used nunchucks in his movies. Watching all the Shaw films, I haven’t seen them being used as a weapon at all, so I suppose I just sort of forgot about them in the context of this chronological series. So when Bruce whipped them out and unleashed a hellish fury of incredibly skilled motion, my head nearly exploded. There’s just no substitute for reality, and Bruce is the real deal when it comes to the nunchaku.

Fist of Fury is also excellently directed by Lo Wei, perhaps his finest work. The production design is especially nice and the film has a much higher budget look and feel than the Shaw Brothers films that came out around it. Fist of Fury is a timeless classic of Chinese cinema, and while modern viewers might find it a little slow in spots, it definitely delivers some incredible Bruce Lee action.

Next up in this chronological jaunt through the Shaw Brothers Martial Arts catalog: we’re back to the Shaw Brothers for a film that I’m told isn’t much of a martial arts movie, but it sounded worthwhile enough to take a look at (because I do enjoy a good Hong Kong gambling movie!), Chang Tseng-Chai’s The Casino! See ya next week!