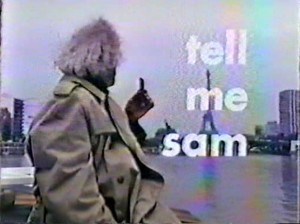 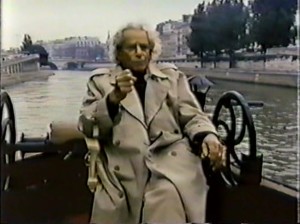 But, like Fuller says, movies trades solely in emotion, so when he began writing for film a few years later, he was able to channel everything inside him onto the screen. This is essentially the base formula for the ballsy, robust films that Fuller made, and I thought this path to the silver screen was especially interesting in comparison to today’s film school culture. Fuller’s life was rich with vivid experiences that shaped him into a man with a distinct worldview and important stories to tell, while many aspiring filmmakers of today wish to go directly from high school to film school to multimillion dollar productions.

Sam Fuller talks about many of his movies throughout the film, telling us how he wished to expose and defeat the racism in America by confronting it directly in his films. It’s interesting to hear him speak on such subjects, but Tell Me Sam also offers a rare glimpse of Fuller at work through some footage from the set of his debut film, I Shot Jesse James, and his final theatrical release, Street of No Return. These aren’t especially interesting or revealing moments, but it’s fun to see Fuller at work nonetheless. And that’s kind of how this whole “documentary” is, it isn’t so much of a documentary as it is a bunch of stories from a man at the end of a long, artistically successfully career. There isn’t much of an authorial drive to the whole thing; just imagine spending a day with Fuller and editing together the best stories and you’ll have a good idea of what Tell Me Sam is. 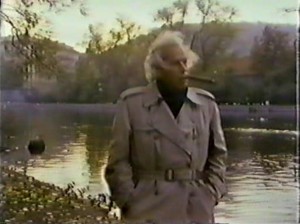 In that way, Tell Me Sam is a documentary only for the super fans. A DVD of both of Weiss’s documentary interviews with Fuller would be an interesting package, although the appeal is probably too small to warrant a release. Falkenau is definitely the more essential of the two, and Tell Me Sam actually duplicates some stories and footage in regards to the Falkenau camp, but together they serve as a great picture of the man Sam Fuller was in the late ’80s. Verile, sharp and as passionate about film and life as ever.

Note: there’s no rating on this one because it didn’t seem necessary on a film that consists almost entirely of Sam Fuller talking to the camera. You either like it or you don’t, and that hinges specifically on how much you care about Sam Fuller.