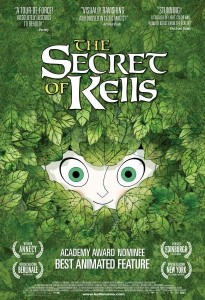 Expectations: Low. It doesn’t look like something I’d care about.

I think this one is more of a case of “not for me” than actual poor quality. I’m unable to tell definitively, but for my money The Secret of Kells was long, boring and somewhat harsh on the eyes. Strong words for a film that garnered high praise from nearly all critics, and earned a coveted Oscar nomination for Best Animated Film, but that’s the way the cookie crumbles. Let’s start with the long, boring part. The Secret of Kells is only just over an hour in length, but it feels like three. I was unable to engage with the story right from the get-go so that’s probably why the damn thing felt so long. I tried though, Lord did I try, but at nearly every turn I was bored. There are some genuinely great moments sprinkled here and there, but by the time they arrived I was already so checked out they failed to truly resonate.

And now for the visuals. I get what they were going for: taking influence from the art of the time the story depicts (the 7th century) and running wild with it. This is a fantastic idea and has worked well for films previous, but the thing is that The Secret of Kells actually looks more like something from the workshop of Genndy Tartakovsky, the man behind Samurai Jack, The Powerpuff Girls and Dexter’s Laboratory. I’ve only watched Samurai Jack in any real sense, and I absolutely love that show. What’s interesting about that is that I love it in spite of its art style and character design. I’m not especially fond of the art overall, but the great characters and the level of filmmaking skill and inventiveness exhibited in Samurai Jack is amazing, impressive and thoroughly entertaining. When The Secret of Kells looks pretty much exactly like that, but features little to none of these positives, I can’t help but be bored.

Film is a visual medium and visual aesthetics are one of my most important criteria for liking a film. I didn’t care for the visuals, so it was really hard to get through this one. The film did completely enthrall my cat though, so that’s something. I don’t think it’s so much that The Secret of Kells is a bad movie, but that I just couldn’t connect with it. It is impressive that a small, independent studio can crank out an animated film of this technical quality though. Watch the trailer and if the visuals don’t bother you, you just might get a good time out of this one. All others, look elsewhere.