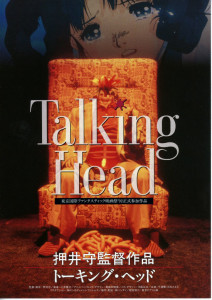 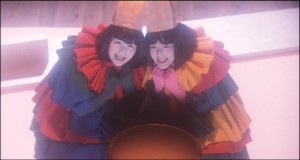 There is a plot. It would be difficult to speak about a movie without one, so a plot is casually inserted here to provide the framework for the discussion at hand. Fittingly, it revolves around the production of a new anime film called, not surprisingly, Talking Head. It’s stuck in development hell, however, because its director vanished without a trace. It doesn’t help that there are no storyboards or even a script. The unnamed protagonist is a “migrant director” hired by the producer to figure out just what the hell the original director was trying to do, and then replicate it. As our hero interviews the staff, trying to discern the point of the film, the staff begins to die, one after another.

Of course, the plot isn’t the point here. It’s there to illustrate the conversation, and show us what the characters are talking about, such as when the screenwriter is disemboweled, and the director speaks about him “spilling his guts” and why a writer might do so. The weirdest of these moments can ascend to a bewildering hilarity, like the guy who comes back to life as a zombie in order to keep working on the film. He is then revived (at least temporarily) by drinking coffee, which is a far more effective metaphor than any employed during The Humanoid. 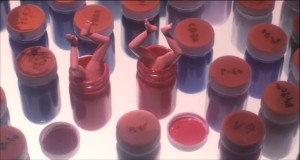 There is a mountain of intriguing talking points littered through the film. It speaks about the transition from silent to talkies, from black-and-white to color, and a host of other factors to a film’s presentation. It supposedly focuses on animation, but it works equally well about any form of film. It’s more about the art rather than the craft of filmmaking, as much as it is possible to separate the two. As such, anyone who has an intellectual interest in stories of any kind will probably find the themes here equally fascinating. 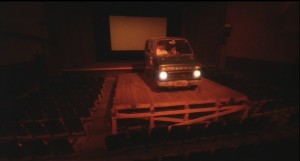 The movie often delves into the realms of the metaphysical and metafictional. Almost the entire film takes place in one set, naturally a theater. The props are obviously props, and the stage itself is stretched into the seats, which are often in full view of the camera. It’s very weird seeing the characters pile into a van and pretend to drive while it sits in the center of the theater. I also found it hilarious when a character got run over by this obviously stationary van. It’s clearly a pretty low-budget film, but it doesn’t need to look polished; in fact, it shouldn’t. The transparency of its effects only help to illustrate its points.

My experiences with Mamoru Oshii’s films can best be described as uneven, but there is no doubt that he is a giant in the industry. He knows what he’s talking about. His musings on the medium are poignant and thought-provoking. Anyone who wants to think about film, or even stories in general, will undoubtedly find Talking Head to be well worth tracking down.

Of course, if you were buying into the superficial premise of a murder mystery, then you’re going to be bored out of your skull. This is a film for lovers of film, not casual viewers. If there is a real problem, it is that they talk about some pretty complicated stuff, and the subtitles may go by a bit to fast to comprehend it all. But, hey, that’s what the pause button is for, right?