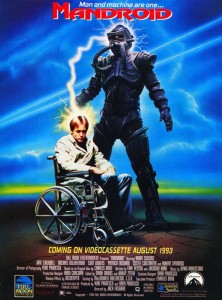 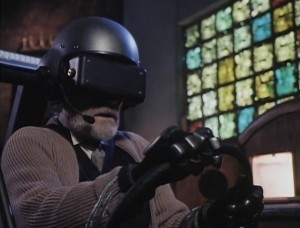 If that plot synopsis was rather wordy and still doesn’t give you much of an idea what this movie is, don’t worry. It’s just the way this movie is. It doesn’t know how to tell a story. But as I mentioned in the intro, it does have a fair amount of fun moments. The movie may be boring, meandering, and lackluster, but you can’t argue with a finale that involves the Mandroid in the sewer firing off a machine gun. More like machine FUN!

The Mandroid itself looks spectacular, and it’s a shame it never really gets the time or the situations to shine like it should. Sure, that scene in the sewer is pretty fun (and it’s one that also contains a dude getting an axe to the chest), but it’s too little too late. There’s so much promise in the opening scene, too. The Mandroid is behind the wheel of a small European automobile, controlled by an old man in a warehouse science lab. It seemed like there was no way it could fail. 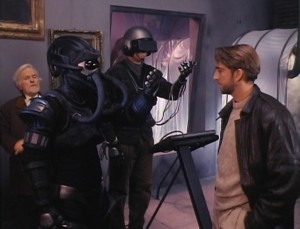 And the villain! What a guy! He’s probably the most interesting part of the movie, even if his arc is a little too obvious and derivative of better “man disfigured by science who turns to careless murder and villainy” stories. This sub-plot takes up far too much time, and takes us away from the Mandroid, but I appreciated the comic book vibe it lends the film. I wish the rest of it held up that bargain, but you can’t win them all.

Beyond the fun villain, my favorite aspect of Mandroid was probably the one that got the least amount of screentime. During Drago’s initial act of villainy, he shoves one of Karl’s assistants into some kind of flash freezer, and somehow — brace yourselves — this makes him start to turn invisible. Maybe I missed something, but all I saw was the guy fall into the freezer. I guess I’ll have to be more careful when I take out my fish sticks for dinner tonight. Anyway, while thawing out in the hospital, he notices he can see through his hand. Huh? It’s really intriguing to see where this might lead, but they never delve into it. The reason they don’t is because they made an entire movie about it! That’s right, there’s a sequel to the story of Mandroid, in the form of a story about a completely different character! Let’s hope the Mandroid makes a fun appearance with that machine gun! Anyway the sequel is called Invisible: The Chronicles of Benjamin Knight, and I can only hope it’s more coherent than Mandroid was. I won’t hold my breath. 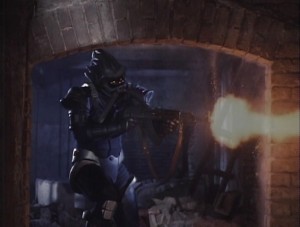 Mandroid is also notable for another reason. Tons and tons of Full Moon movies made during the ’90s were shot in Romania, but almost every one I’ve seen (except for the Subspecies series) tries to pass it off as the United States. While there’s nothing wrong with that, it was nice to see Mandroid just call a spade a spade and set itself in Eastern Europe. Did they have to go the stereotypical route with peasants transporting livestock via the train? Probably not, but I still enjoyed the flavor of a far-off place instead of Full Moon trying to hide it the best they could (which, realistically, is never all that well).

Mandroid definitely does not live up to the awesome in its title, and that guy in the wheelchair on the poster is almost completely AWOL. I had hoped for an amazing tale of empowerment, where the disabled man developed a hulking Mandroid to be able for him. Maybe he’d get drunk with power and smash through some walls or rip some car doors off, and then there’d be a heartfelt finale where the disabled guy would learn that with great power comes great responsibility. Not before his Mandroid has a fight with the fully invisible invisible man, though, which might sound dumb, but imagine the Mandroid shadowboxing in a dank Romanian sewer with hard-driving ’80s rock on the soundtrack. This scene could also double as the incredible training montage that would come a few minutes before the big “fight.” I wish the real Mandroid was as awesome as that sounds. Oh well.

Even still, Mandroid is a fun, middle of the road Full Moon film, containing lots of great moments. And no matter what, that title is, and always will be, awesome.

Next week on Full Moon Tuesday, I’ll be reviewing the first Full Moon film of 2013, provided I can get their new streaming service at GrindhouseFlix.com to work right! It’s uncharted territory for me, so wish me luck and look out next Tuesday for my review of Ooga Booga! The film debuts there on March 12!