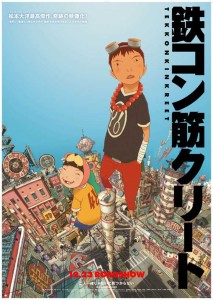 There is a lot of CG mixed in here, but it’s some of the best I’ve seen. It never really bugged me, and that’s saying a lot coming from me. The animation felt a little jerky at times for such a large theatrical release, but it meshes well with the simple character designs and only serves to heighten the contrast between the characters and the luscious backgrounds. Long before the plot started heading into psychosis, the sheer visual oddity had me wondering how much of the film should be taken literally.

It’s not as much of a mindfuck as some other stuff I’ve seen. Perfect Blue and Utena mop the floor with Tekkonkinkreet in that regard. But it’s still really weird, and at the end it starts going into some seriously hallucinatory territory. It doesn’t go so far as to be incomprehensible, but still enough to make me think another watch might give new insight into the tale.

Beyond the striking visuals, the story itself is far from simple. Three major plot lines weave through the film and keep things intriguing. The main arc is about two orphaned street urchins named Black and White trying to survive on the mean streets of Treasure Town. Their story is one of friendship, using classic “odd couple” pairing. Black is a total badass, and he knows it. White is outgoing and has more than a few screws loose. Black does everything for White, even down to tying his shoes. But White is also the reason Black keeps going and doesn’t dive wholly into despair, becoming just another sadistic street thug.

The second layer to the film is an old yakuza boss called the Rat. He’s been out of town for a while, but now he’s back to stir up trouble. He grew up in this town, and his reverent nostalgia in such an unscrupulous crime boss makes for a refreshing and surprisingly sympathetic character. Who else would mount such a loving defense of a decrepit strip club? He’s been hired by a huge corporation to scare off the street gangs, including Black and White, that are getting in the way of the company’s plan to build a theme park in the area, but Rat doesn’t much care for renovating his old stomping grounds.

That conflict between Rat and his employer leads to the third story element. One of Rat’s henchmen, Kimura, is put on the sidelines after an embarrassing failure. He’s rather peeved about it, and one of the corporation’s consultants, a creepy sleazeball known only as Snake, starts testing Kimura’s loyalty. Kimura has a baby on the way, and his impending fatherhood has him questioning where his life is headed. Snake takes hold of these doubts and manipulates Kimura into working for him instead.

Looking over what I’ve written so far, it sounds like a very emotionally complex drama, which it is. But now throw in some crazy super-powered assassins that chase Black and White all over the city. The kids duke it out across rooftops and on top of speeding trains. It’s not the most thrilling action in the world, but it does its job of being menacing and vicious.

And then there’s the strange psychedelic bits, such as White floating down from a building like a sheet of paper fluttering in the wind. I’m not even sure what to make of this stuff. By the end, when the minotaur shows up to kick some ass, you are waist deep in some really weird shit.

All of this mixes seamlessly into a deep and affecting story. It wasn’t always enthralling, but at the end, I found the journey well worth the ride, and I have a hunch I might like it even more on a second trip through. This probably won’t be up everyone’s alley. The character designs can be a turnoff — for a long while I avoided this film for that very reason — and the surreal elements will throw off even more people. But once I got into it, I found it to be a refreshing breath of originality among a sea of generic mediocrity. Don’t dismiss this one as silly fluff. There’s a lot of great content under its scruffy exterior.