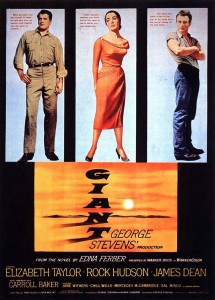 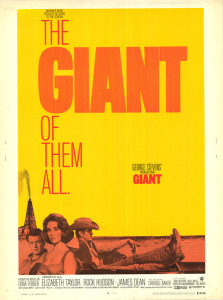 Giant get points for confronting racism and promoting feminism before it was cool, although I much prefer the hard-hitting, direct style of someone like Sam Fuller for these types of issues. The thing about Giant is that racism is always around in the film, but rarely is it a focal point. It becomes more prominent as the film progresses and the characters can’t ignore it as much as they could earlier, but it still has less impact than it could’ve had (especially when there’s a couple of white actors in “brownface” playing Mexicans). While its anti-racism message is definitely a good one, Giant doesn’t say much more than a simple, “You should look past skin color.”

Giant says a little more when it comes to the theme of how each person must grow through life and find a purpose. James Dean’s character, Jett, starts out as a young, indifferent loser, without much ambition or anything to call his own. Through a good bit of fortune, he comes into a piece of land. This seems to give him purpose, and now he lives his life actively working towards something instead of brooding in a parked car, or coolly peering at Leslie from under a wide-brimmed cowboy hat. But because he is defined by his indifference to others and he refuses to change, he remains the same detached asshole he always was, now he just has power and money to go along with it. 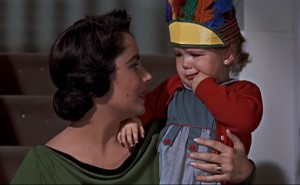 Leslie also begins the film without a purpose. She’s strong-willed, smart and spontaneous, deciding to marry Bick almost immediately after laying eyes on him. Bick expects nothing more of her than to sit around and be a good wife, but Leslie isn’t the kind to stand still. Instead, she immediately takes to the Mexican staff who live in a small village near the Benedict ranch, helping them in any way she can. She also recognizes Bick’s needs and does her best to fill them, hard as it may be. She is a character that moves quickly, achieving both growth and purpose over the course of the film.

Bick is a different story. He always had a purpose, but it wasn’t the most well-thought through. His purpose was simply to survive and keep the cattle ranch afloat so that he can pass it down to his children. He doesn’t care much about living his life or being with his family, just as long as he leaves them with an even grander family legacy than he was given. He is a rich man, but that also doesn’t matter much to him. He wishes to be a legend, a giant. While this is a somewhat noble ideal, the world is changing around him and what was once legendary is now passé. 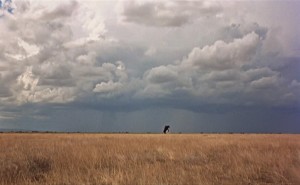 Eventually the film gets around to tying these themes together into an ending, but as I mentioned it takes way too long to get there. Thankfully the film is so well-produced that it’s still largely entertaining and enjoyable to watch, even if it does lack a lot of narrative drive. The color cinematography is superb, and the frequent wide vistas of the Texas desert are stunning. Many of these shots also carry a lot of unsaid storytelling which adds to the artistic appeal. For instance, the far away shot of a horse bucking a rider looks fantastic on its own, but it becomes another thing entirely when we connect it with the solitary death it represents, the result of giving in to our anger and resentment. I definitely don’t think Giant is any particular masterpiece, but it’s shots like this that show the power of Stevens as a director, and make his Best Directing Oscar for the film feel justified.

Giant is big like the state it depicts, although I doubt many die-hard Texans are too excited about this one. It doesn’t exactly glorify the residents of the state. I wasn’t entirely won over by the film, but I consider the fact that I didn’t rip out large tufts of my hair or fall asleep out of pure boredom a major win for a film of this size. Fans of ’50s cinema will definitely find at least a few things to enjoy here, if not a whole lot of them; Giant was nominated for 10 Academy Awards.

Giant was a part of the 2013 Blind Spot Series where I see one movie a month that I feel I should’ve seen a long time ago. It’s all the brainchild of Ryan McNeil over at The Matinee, one of the web’s premiere film blogs. Head over there tomorrow where he’ll have a post of his own for the series, as well as links to all the other people taking part in the series.