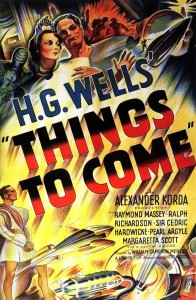 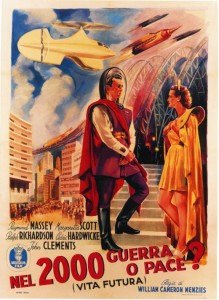 Even low-budget films now have access to equipment that far exceeds what was around in the ’30s, but yet many of these films don’t have special FX as good as Things to Come. There is definitely something organic and impressive lost in the convenience of digital FX. Things to Come‘s FX work is a stunning achievement for the era, often blending and cutting between varied methods of illusion such as scale models, rear-projection and composited pieces of film. I know this wasn’t the first film to feature FX, but did any previous feature have FX on this grand of a scale? I honestly don’t know (and it’s been too long since I’ve seen Metropolis to remember the scope of its FX), but I do know that Things to Come is incredibly ambitious, and it’s shocking how well these technical aspects of the production still hold up.

But at the same time, Things to Come is a hard film to comprehend. On one hand, there’s a distinct message that wars are pointless destruction that only hold humans back from true progress. OK, sounds about right. But as the film progresses we see what society eventually grows into after the wars have stopped, and some of the citizens are still crying foul. They ask how much progress is too much, and nostalgically remember the “good ol’ days” before Earth was an idyllic and peaceful place. There’s no clear indication that these rebels are meant to be the villains, but as the film up to that point presents the scientists as the heroes, it is natural to assume this initially. They are a threat to Earth’s peace.

As this section rolled on, I began to side with the citizens, though. Their argument seemed more reasonable than the scientists’. What is the end goal of progress? It’s an endless cycle, and the grandson of the film’s “hero” (AKA the son of the kid who got that “advanced” 1940s toy) is now in charge, and has been brought up knowing only progress and technology. He can’t see the whole picture. His final monologue relates that progress must never stop, that even when we’ve conquered every planet and piece of the universe, it will only be the beginning. His family once brought liberation to the people (from a warlord who also initially rose to power by liberating the people from what ailed them), but now he’s an overzealous fascist who is oblivious to doing things for the good of the people. Like a line in one of my favorite Who songs, “Meet the new boss, same as the old boss.” So at what point do we become satisfied with technology and progress? It’s not in human nature to be completely complacent with one’s current standing, so I suppose the answer is “never.” But even if we never give up that strive for a better future, we should at least try not to drive ourselves off the cliff with a blind love of things shiny and new.

Things to Come is a landmark of classic science fiction cinema, still relevant and intriguing even now, so many years into the future. You’ll have to wade through some abrasive, hollow 1930s sound recording and some dialogue exchanges that go on far too long, but it’s definitely worth it. 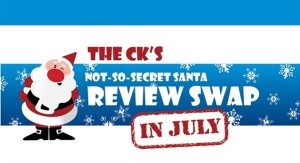 This review of Things to Come was part of The Not-So-Secret Santa Review Swap Blogathon run by Nick @ The Cinematic Katzenjammer! Head over there and check out all the other great content being produced by the community for the event. And thanks to whoever suggested this movie, forcing me to finally see the film after it sat for many years on my to-watch list!