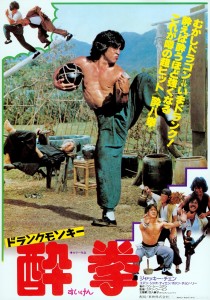 Jackie’s acting feels much more confident here; I’m sure the success of Snake in the Eagle’s Shadow had something to do with that. Having tasted fame and adulation, he returned to the screen with new vigor. His movements are also improved, taking his kung fu into new territories through a plethora of amazing acrobatic flips, flops, hits and rolls. And that’s not even considering the drunken-style kung fu, which is the highlight of the entire film. Yuen Woo-Ping’s father, Simon Yuen (as Begger Su), perform the drunken routines admirably, but Jackie’s drunken style is flat-out riveting. It takes a while to get there, but when that while is a whole mess of random, incredible fights and Beggar Su teaching Jackie (who’s playing Chinese folk hero Wong Fei-Hung) with all kinds of crazy training methods, it’s not really an issue. How ’bout hanging upside down from your feet and taking water with teacups from buckets below you to a bucket behind your feet? Or breaking walnuts between two fingers? Wong Fei-Hung’s loss is clearly our gain.

And speaking of Wong Fei-Hung, his depiction here as a cocky, arrogant young man was a daring move. As a Chinese folk hero, he was always shown with respect in films. Stories involving him focused on his noble qualities. Think Tsui Hark’s Once Upon a Time in China series starring Jet Li, and you’ll know what I’m talking about. But Yuen Woo-Ping and Jackie Chan went out on a limb with Drunken Master, showing the audience a prequel of sorts to that great hero. It makes perfect sense looking back, but imagine if audiences hadn’t connected with the comedic tone, and found the film offensive to Wong’s legend? I imagine Chan’s career would have gone a much different route.

Describing the fights would be something of a moot point, as they are something that really needs to be watched. The movements from the fighters reminded me of watching the Olympics. You see people performing amazing feats of strength, agility and stamina, some so amazing that they defy your ability to comprehend that a human is even capable of them. Many people disregard martial arts films for various reasons, but I don’t think anyone could deny how impressive some of these physical performances are. And the supporting characters are just as important to the success of the fights as Jackie is, executing Yuen Woo-Ping and Jackie’s choreography without fail. I was especially impressed with the high-kicking skills of Linda Lin Ying, an actress that was unfortunately only in a small handful of martial arts films. And, of course, Simon Yuen and Hwang Jang-Lee are just flawless… but you knew that.

Drunken Master is a true martial arts classic that continues to get better every time I watch it. It’s no surprise that it catapulted Jackie Chan into global stardom, as he amazes and delights in every moment he’s on-screen. If you consider yourself a martial arts fan, this is easily one of the top must-see films from the era.

Next up in this chronological journey through the films of Jackie Chan is the Lo Wei-directed 1978 comedy Spiritual Kung Fu! See ya then!