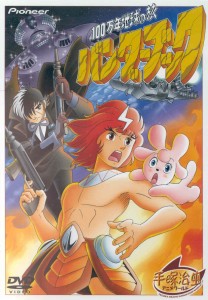 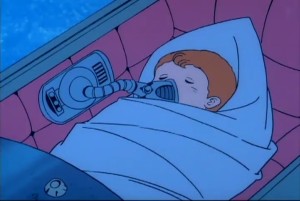 It certainly isn’t provocative; the cutesy art style doesn’t really work for that. And that makes it all the more bizarre to see, especially when the film hammers you with it in the first ten minutes. It’s there because this is the only time aside from Conan the Barbarian where I have seen a shape changer’s clothes that didn’t mysteriously transform along with them. These shapeshifting aliens find a human baby in an escape capsule that landed on their planet. The kid’s parents launched him into space when their own spaceship was about to be destroyed.

The aliens raise the boy and name him Bander, teaching him their policy on never killing. They go so far as to cut the tails off animals, so they can eat meat without killing. His adopted sister falls in love with him, and he’s pretty happy with that. They aren’t blood relatives, so they figure that’s good enough. 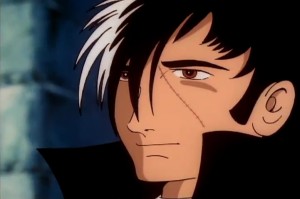 Bander also learns how to fight, even though the planet is peaceful. Apparently, humans are such a bunch of violent assholes that the whole universe is scared they might attack at any moment. That fear turns out to be pretty well-founded, as some human space pirates show up to raid the planet. They’re led by a guy named Black Jack, and anyone familiar with Tezuka’s characters will recognize him. His role here is very different from his usual role of wandering doctor. In Bander Book he’s more of an antagonist.

Black Jack kidnaps Bander and dumps him on a desert planet, thus beginning Bander’s quest to find out who his real parents were and why they were killed. From here the movie bounces from space opera, to western, to a goofy horror mansion reminiscent of something from Scooby Doo, then some to time travel, and on to an Orwellian future dystopia. It’s a pretty meandering quest. While Bander’s goal is always at the forefront of his decisions, there’s often a sense that his current predicaments have little to do with anything. 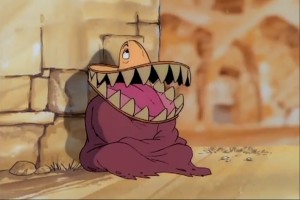 But it’s hard to complain about the lack of focus in a movie with so much inventive fun. The aliens are some of the strangest creatures you’re likely to see. Some of them would be so difficult to describe, that I won’t even bother trying. As for some of the interesting ones I can describe, there’s a guy with a sombrero, but it turns out the sombrero is actually the guy’s head. There’s an awesome aerial dogfight with a cyclops riding a dragon. Then there’s the goofy ballroom dance where all the women have sleeveless dresses. No, I don’t mean they have bare arms. I mean their arms are stuck inside their dresses, making them look like giant dancing Christmas tree ornaments with added goofy hats in the shape of animal feet.

There’s a lighthearted sense of humor that permeates this tale, even when it deals with the more depressing concepts of human savagery and a Big Brother government run by a despotic computer. If you’re fond of old Looney Tunes cartoons, then this humor will be right up your alley. It does make the mood of this film difficult to pin down, though. On the one hand it deals with disturbing moral implications about humanity as a species, but then it does so with cheerful exuberance. 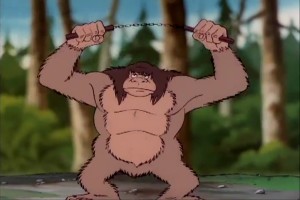 It’s one of the stranger experiences I have had watching a film. The plot is fractured, but the whole movie is too much fun to find fault with it. Even when the time machine appears in a stunningly obvious deus ex machina moment, it is soon followed by a nunchaku-wielding gorilla. That gorilla is on-screen for less than five seconds, making it one of the most criminally underused concepts ever. But I still can’t find it in my heart to complain when the movie graced me with such a sublime moment of greatness.

Bander Book is tons of fun if you’re ready for it, and it would even make a great children’s film provided you won’t get too upset at the idea of little Johnny seeing drawings of boobies in completely nonsexual situations. Or even worse, he’ll see a quick overview of evolution! GASP!

And if you live in the US and my review has piqued your interest, you can watch it freely (and legally) at Anime Sols. You’ll have to register for their site (also free) and dig it up in the section called 24 Hour TV Specials where they also keep the next two annual TV movies that followed Bander Book.

No trailer, but I do have a small clip from the film you can checkout.