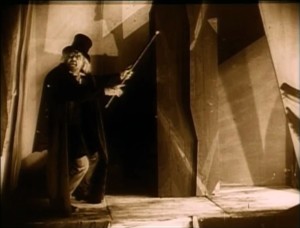 In a film as thick with atmosphere as The Cabinet of Dr. Caligari, you could single out nearly any scene and find a good one. The moments that especially stood out to me both involve Dr. Caligari himself. Some murders have happened around town and Dr. Caligari is the prime suspect. While investigating his home, the policemen get word that someone has been caught for the crimes. After they walk away, Caligari unleashes a wicked laugh that cuts deep into your soul (even though you can’t hear it). It was so unexpected, and Werner Krauss’s face is so expressive that it creates a creepy, haunting image. The other moment comes towards the end when we see a flashback to when Dr. Caligari first comes in contact with the somnambulist (try to say that one 10 times fast). Caligari is so triumphant and joyful, even going so far as to rip the book he’s holding in half. The scene would be creepy anyway because of his strange exuberance, but coming when it does in the story makes it quite an unsettling moment. 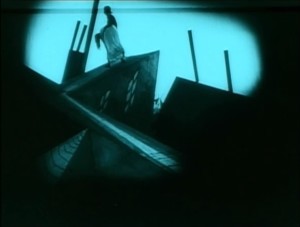 And then there’s the ending. A truly masterful ending that sealed the deal on this one becoming a silent classic. Without going into specifics, the ending to The Cabinet of Dr. Caligari is a milestone in film history. But the ending was supposedly imposed on the director by the studio, proving that all studio enforced endings aren’t the work of the devil. While we’ll never know how the film would have been received or remembered without this ending, I can’t help but think that it is yet another interesting thing in Dr. Caligari’s corner that helped the film endure as a classic for so long.

The whole movie! Thanks, Public Domain!

The Cabinet of Dr. Caligari was a part of the 2013 Blind Spot Series where I see one movie a month that I feel I should’ve seen a long time ago. It’s all the brainchild of Ryan McNeil over at The Matinee, one of the web’s premiere film blogs. Head over there tomorrow where he’ll have a post of his own for the series, as well as links to all the other people taking part in the series.