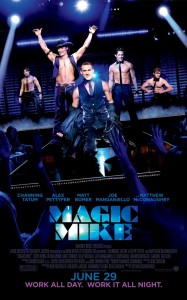 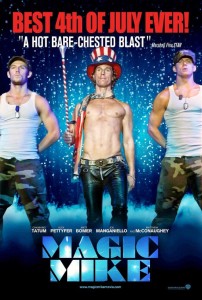 Dallas is the club’s owner and operator. He’s roughly 40 and past his stripping prime, but he’s still running the show and hyping the crowd for the younger guys to follow. He represents the possible end game for the characters of Mike and Adam, if they choose that lifestyle, or perhaps if they don’t choose anything else. Mike is 30 and he’s at a crossroads. He’s in his prime and killing it in the stripping game. The sky’s the limit and the only thing stopping him is his imagination. Mike has other ambitions, though, and he’s obviously less than happy with his current lifestyle (whether he wants to admit it to himself or not). And Adam is that young kid brought into “the life” with stars in his eyes. He represents what Mike was probably like 10 years earlier. In these three characters we have something of a complete character arc, while each individual character is also given their own arc over the course of the film.

This structure is incredibly smart, as it creates all kinds of ways to discuss the characters and their paths after the film ends. Will he do this? What about when this happens to whoozits? The ending is fantastic, and offers up something that completely blindsided me. I’m sure many saw it coming (and no, this is not a clever pun for whatever explicit ending you might be imagining), but it took me by surprise. I guess I should say that the circumstances surrounding the ending, and what it meant to the characters is really want surprised me. In any case, it was great.

Partway through the film I made a note about the story being a known quantity, and that Magic Mike wasn’t all that daring (on-screen penis pumping, notwithstanding :)). The more I thought about this I realized that it actually was kind of daring to make a movie about male strippers. Sure, it’s just something of a role reversal for all the previous female stripping movies (including a house party scene in cop outfits gone wrong like in The Players Club), or a re-tread in ways of Boogie Nights, but to focus a movie around the act of providing women with pleasure is a pretty big deal. Films are routinely given NC-17 ratings for sex scenes that focus on female pleasure, and while Magic Mike doesn’t cross any barriers there, it is nice to see women smiling, cheering and having a playfully sexual good time. 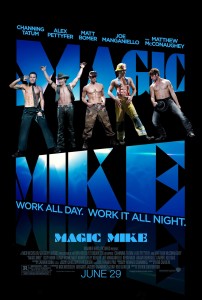 So after all those words and discussions of character arcs, you probably just came here to see what I thought of the shaking male asses, plentifully offered up to the viewers. I loved every second. Yup, every last second. Not only is the dance choreography incredibly well-done, inventive and intoxicating, Channing Tatum is an absolute beast of a dancer. If his career ever sends him to Dancing With The Stars, he’s going to MURDER the competition. Here’s some of my thoughts (some of which I exclaimed while watching):

“Oh shit, he’s like a fucking jaguar!”
“Damn, that’s some Jackie Chan shit.”
“The moves of a python!”
“HAHAHAHAHAHAHAHAHAHA!”

That last one was a hearty laugh born purely out of sheer shock at how amazing the preceding move was. Seriously, y’all, this shit was nuts! The other guys do well too, but honestly he ain’t called Magic Mike for nothin’.

Visually, Magic Mike doesn’t share the clean, perfectly composed style of Soderbergh’s best work (best to me, anyway). This is definitely one of Soderbergh’s indie joints. I found a lot of the cinematography too dark, and every outdoor scene is bathed in a deep yellow that I didn’t like at all. I’m sure its usage was to achieve a specific look or feeling, but that was completely lost on me. But Magic Mike also contains some of Soderbergh’s most inventive and interesting shots yet, specifically the shot that comes when Adam’s first night on the job culminates in some after-hours sex. It’s an extraordinary shot that goes much further than you’d ever expect it to, breaking rules and visually exciting at the same time.

I loved Magic Mike, and I think it’s safe to say I’m a big Soderbergh fan now. Despite the overt dry humping and electric choreography, Magic Mike is actually a subtle drama. It works on both levels and I hope Soderbergh doesn’t pull a Malick with this upcoming filmmaking hiatus and take 20 years to make a comeback. If nothing else, at least I still have his “final” two films and a few of his older ones to still check out.