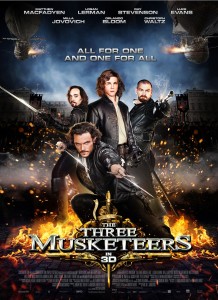 Where The Three Musketeers really shines is in its production design, specifically the costumes. I’m not one to notice costumes much, and I generally find the films that get Oscar nominations in the category somewhat perplexing as to why they received the accolade over something else; it seems like a lot of personal preference on the part of the people voting. In any case, The Three Musketeers was absolutely robbed of a nomination AND an Oscar win for its costume design. It’s outstanding! There are tons and tons of costumes, and they’re all interesting, intricate and incredibly fun. If we can give sound Oscars to dumb action movies, why can’t something like this be up for a costume design Oscar?

The set design is also really well-done, with the “lair” of Christoph Waltz standing out as the film’s best location. The Three Musketeers was all shot on location in Germany, so I’m fairly certain that this is a real place and not a built set, but regardless, it’s brought to life by some rather bold choices. The room is completely white, but behind Waltz’s seat hangs a giant white crucifix with a golden flame backdrop. As eye-catching as this is, the large-scale, miniature war figurines set up like a huge game of Risk in the middle of the room are still interesting enough to fight for your attention. The scene is nothing without the grandeur of the room’s stunning architecture, though… and let’s not forget those costumes! It’s like a visual representation of the film’s plot, constantly taxing your senses and your ability to focus, providing an incredible amount of stuff to feast your eyes on.

Where the fun starts to crumble a bit, though, is when fatigue sets in. The human brain can only handle so much at once. This point in the film is not one that I can place my finger on for everyone, as we all have different breaking points. The Three Musketeers is a great way to find yours and then compare with your friends. I don’t generally recommend watching a movie in segments, but it actually might be preferable with The Three Musketeers. And for the record, I broke at around the point when the musketeers hijacked Milla Jovovich’s carriage and hoisted it into their airship… which is crazy because so much insane airship stuff happens after that. I should probably re-watch that section later on to experience its full glory, unhindered by the exhaustion of the first hour or so of the film.

The action is somewhat poorly filmed at times, making it hard to decipher exactly what’s going on at a given moment. This is more frustrating than it is bad, though, as there are more than this movie’s fair share of inventive and fun moments of fight choreography, with many of these even reminding me again of wuxia films. And keep in mind that I say all of this as a true fight film junkie, so if you’re not accustomed to watching a lot of fight films, you might not have the same negative issues.

I also can’t imagine why the reviews I’ve seen for this one are so overwhelmingly bad. Sure, the movie isn’t great, but it’s a B-Movie through and through, and it never once asks you to accept it as anything but. I mean, when the film opens with an Italian ninja rising from the waters of a canal to murder a guard with a throwing knife, you have to know what you’re getting yourself into, right? Did people actually take this movie seriously?

Whatever, I can’t worry about what other people thought. I thought it was bad, but highly enjoyable. Your mileage may vary, of course, but if you’re inclined to like really exaggerated, over-the-top nonsense, you’ll find more than enough to satisfy with The Three Musketeers. The art of the mainstream, high-budget B-Movie has run rampant throughout the Hollywood blockbuster, but The Three Musketeers is bold enough to embrace its cult roots and just throw caution to the wind. And those costumes… Très bien!