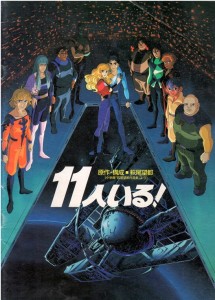 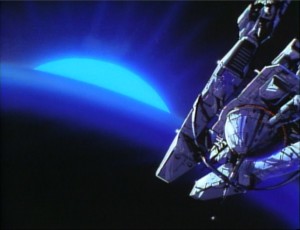 Once the guys get to their destination, they find out there’s an extra man in the group, and none of them are owning up to being the stowaway. Tada has some psychic intuition, but when he can’t tell who is lying, everyone starts getting nervous. This mystery aspect is where the film runs into a few problems, though.

First off, the surprise ending isn’t all that much of a surprise. It was kinda predictable, to be honest. The other problem is that the characters just don’t have the kind of depth necessary to make the mystery compelling. So when the culprit is found out, I just said, “Oh, it was that guy,” rather than, “Of course! It all makes sense now!” It did make sense, but without any real clues to finger the guy, it lacked any kind of impact. We just aren’t given enough character depth to the suspects for the audience to create their own theories as the film goes on. 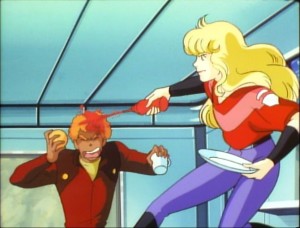 Aside from Tada, the only character that gets much depth is Frol, who claims to be a man despite looking very effeminate. Frol’s feminine charms constantly leave Tada embarrassed and confused. I can’t go into much detail without spoiling things, but Frol’s gender identity issues turned out to be far more convoluted than I ever could have imagined. Leave it to Japan to come up with this kind of madness. It was definitely the biggest surprise of the film.

The second biggest surprise of the film was the massive food fight in the middle of the movie. I never expected them to get so upset that they would resort to hurling pies and squirting ketchup at each other. And then there’s the music that goes with it. I’m long familiar with the anime tradition of having a central song that captures the spirit of the film playing over a meaningful scene. But did they have to make the emotional core of the film a massive food fight? I really wish I could describe the song for you, but I was too busy laughing my ass off to pay it any attention. I was only aware that it was playing over the single most ridiculous scene they could have picked.

But as much fun as Frol’s gender confusion and the random food fight scenes were (those two scenes alone gave me enough entertainment to make the film worth watching), it isn’t really a compliment to say that the most surprising moments of your mystery film have nothing to do with the mystery. Fortunately, the film has a lot of bizarre sci-fi goodness to keep it entertaining, even though some of it is no more futuristic than an ATM machine.

The ship is overrun by genetically engineered vines that were created to be the electrical cables. And the ship is, for some reason, filled with hidden bombs that knock it out of orbit, and headed for the sun. Those two seemingly unrelated tidbits converge, though. As the ship drifts closer to the sun, the heat causes the vines to spawn a deadly disease the crew must figure out how to stop. This is a good thing for the plot, since having one more guy on board than you expected isn’t all that threatening. Having a legitimate threat of death provides some actual tension to the story and a compelling reason to see how they take care of things.

So while the film fails at its primary goal of weaving a mystery, it does succeed fairly well at its secondary goal of being an intriguing sci-fi adventure. It’s sad that the least surprising part of the film is the conclusion, but this is one of those times when the journey is better than the destination.