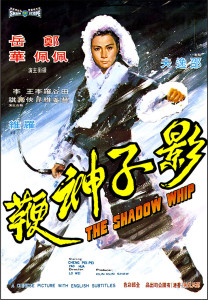 The Shadow Whip features a screenplay by none other than Ni Kuang and Lo Wei! Two of Shaw’s best writers joining forces on a wuxia story? Sign me up! The end results don’t live up to the hype, though, as The Shadow Whip is more straight-forward than a traditional Lo Wei script, but not as thematically defined as your average Ni Kuang script. This makes the film seem like something of a watered-down version of both styles, and it was rather disappointing to me. But even though this is yet another story of a master hiding from his past, a security bureau done wrong, and a swordswoman (or in this case, a whip-woman) caught between multiple factions, this doesn’t really feel all that derivative. It is, of course, but it’s written and acted well-enough that you probably won’t notice. And with all the fun whip antics, you should be more than entertained.

And by “whip antics” I mean stuff like: whipping spears from one enemy’s hands and into the torso of another, or whipping a spear into a pole and then whipping an enemy to be impaled on the embedded spear. It’s so fun. My favorite of these moments is when Tien Feng and Cheng Pei Pei are fighting side-by-side. Tien Feng whips the guy he’s fighting up into the air, and Cheng grabs him with her whip in mid-air and pulls in the opposite direction. The guy’s leg rips off in one direction, and the rest of his body flies off in the other. Wuxia whip alley-oop!

The first couple of fights take on an interesting vibe, though, one of a detached bystander experiencing the fight, instead of a traditional action focus. At one point in the first fight (between Yueh Hua and the Serial Trio), the battle “rages” on one side of the screen, while we focus on the dialogue taking place with Cheng Pei Pei on the other side. The choreography is noticeably lazy in this shot, too. Lo Wei has always been a director more focused on the machinations of his characters and not their raw, martial abilities, and this moment in The Shadow Whip is a perfect example. The fights are mere window dressing to whatever plot he has cooked up.

Later fights do take precedence, though, and provide a good amount of entertainment. In the grand scheme of things, they’re pretty poorly carried out and rather uninteresting, especially considering the heights that Tang Chia and Lau Kar-Leung had already achieved on The Duel or The New One-Armed Swordsman. But you can’t expect Chang Cheh out of Lo Wei, so the fights are what they are. The first Cheng Pei Pei fight is a highlight, including a shot where she starts on the room’s second floor balcony and then jumps down to attack multiple guys on the ground floor, all in one shot. And I haven’t even mentioned all the swords being kicked, thrown or knocked into enemies’ torsos from across the room, and that will always, under any circumstances, make me smile. At the end of the day, these aren’t great fights, but they are fun fights.

The Shadow Whip isn’t outstanding, but it’s a lot of simple fun with a lot of convoluted twists to keep wuxia fans excited. The narrative payoff is also better than expected, although it’s fairly predictable and average in terms of other Shaw films of the period. Whatever, it’s an 80-minute movie composed almost solely of fun action sequences set against snowy backdrops. You could do much worse.

Next up in this chronological jaunt through the Shaw Brothers Martial Arts catalog is The Swift Knight from director Cheng Chang Ho! Every one of his films I’ve seen has been better than the last, so I have high hopes that this one will be pretty good! See ya next week!