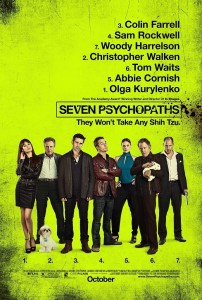 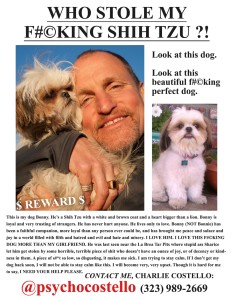 I will always be won over by a story that involves purposefully obscuring reality so that the audience isn’t entirely sure of what they’re experiencing. Seven Psychopaths never truly dips into that well, but it does kind of hover around it like a vulture and its scent is very aromatic. I don’t want to go into specifics here for fear of spoiling everything, and besides, it might just my personal obsession with that kind of story, coupled with my general paranoia, that’s making me think someone’s about to pull the rug out from under me. I honestly don’t know, but I like the movie better thinking there’s another layer around the outer fringes of the tale. The more I think about it, the crazier I feel for thinking there’s anything other than the surface-level stuff, though.

But what’s on the surface, you ask? Well, there’s a hell of a lot of graphic violence for one. Like “I watch a lot of gory horror movies, but this shit is gnarly as fuck” violence. There’s literally a scene of a lady sawing a dude’s head off with a saw. Holy shit! And an incredible head explosion. Seriously, one of the best modern head explosions I’ve seen. There are a lot of movies that claim to have unflinching violence, but Seven Psychopaths truly does not fuck around. What makes it strange, though, is that at its heart this movie is a comedy. A very, very dark one, obviously, but a comedy nonetheless. And the violence here isn’t exactly within the horror comedy style, either. I’ll be the first to admit that I’m a fucked up individual, but I have a hard time coming around to laughing at a movie with a tone like this one that also whips out such extreme violence as this. I had the same issue with Django Unchained, but before I start another 1500 words on my issues with that movie, let me get back to Seven Psychopaths.

Movies that shift tones quickly can be very good, and but during Seven Psychopaths I was always in some state of unease. I liked some bits, while others left me completely cold. I barely laughed at all, but there were some truly inspired moments of comedy. The violence was incredibly graphic and technically well-realized, but it’s also over the top and there purely for shock value (and as dark comedy). This type of scale-balancing talk can only mean one thing: that Seven Psychopaths was just OK. I’m glad I saw it and I was definitely entertained, but it didn’t wow me. I imagine if this came out when I was a teenager (like Pulp Fiction or The Usual Suspects did) then I would be singing a different tune,  but for now I can only call it like I see it. That’s me, though, and I’m sure many would enjoy it regardless. Provided you are somewhat sadistic, of course.