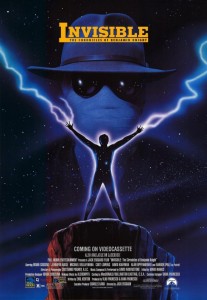 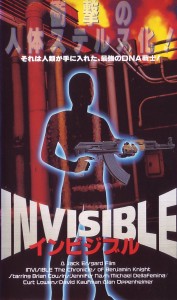 I could attempt to recount the general plot to you, but to succinctly describe it is just about impossible. I just read the back of the box and said, “Oh, so that’s what they were doing!” Apparently the good guys, wheelchair-bound Wade and scientist Zanna, are trying their damnedest to find a cure to Benjamin’s invisibility, all the while the evil doctor Drago is plotting to steal their power crystals. Some of that comes through while you’re watching the film, but it never feels like there’s any overarching struggle or tension other than the general peril going on within the current scene.

But that’s OK, because a lot of that immediate peril is great stuff! Do you like thrilling car chases? Yeah? Well, how ’bout one in a stolen police jeep through the streets of Romania with Wade the wheelchair guy firing a machine gun out the back window? Fuck yeah! What about bitchin’, but kinda slow sword fights? Pretty awesome, right? And explosions? Everyone likes explosions, and Invisible features more than its fair share of cars exploding! Invisible is proof positive that a film can rise above a poorly told plot with heaping amounts of FX, cheap thrills and good old fashioned WTF. And Invisible almost delivered on that shadowboxing idea from my Mandroid review, as Mandroid holds up a punching bag for the Invisible Man to hit with his invisible hands, and then he wigs out and attacks Mandroid with an ax. Perhaps after reading that my argument about plots not needing to make sense makes more sense. 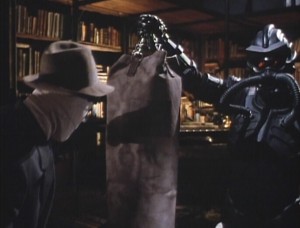 At this point, you might wonder why the rating isn’t higher when I clearly had a blast watching Invisible. Well, some of the film’s choices annoy a lot. First off, this isn’t much of an invisible man movie. It’s a movie that features an invisible man character, and every FX moment involving his invisibility looks great, but he’s not the focal point of the movie. He’s merely a supporting character that happens to drive a lot of the other character’s actions. He doesn’t even show his bandages until almost 15 minutes into the movie! In a movie this short, that’s inexcusable.

Also, no matter how many excuses I make for the plot, or how many scenes of unhinged crazy added up to fun entertainment, it doesn’t take away the fact that the plot is as threadbare as the underwear at the bottom of your drawer. This makes the scenes surrounding the fun slow and tortuous because it’s so hard to decipher what’s going on. I imagine re-watches would clear things up, but a movie should make a little more sense than this on the first go-round.

But I can’t be negative for too long about a movie I legitimately enjoyed as much as this. It’s not for everyone, but if you like B-movies with a lot of random elements you could do a lot worse than this one. Even if you thought Mandroid was just OK like I did, Invisible: The Chronicles of Benjamin Knight is definitely the better of the two in terms of entertainment value.