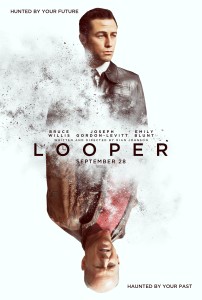 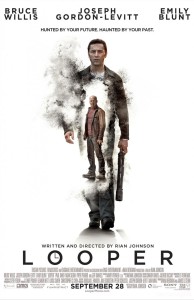 One could easily write a thousand words on the plot holes (or loop holes — ZING!) of Looper, but I’m not really interested in doing that. My time with B-Movies has made me very forgiving. There’s some stuff in this movie that heavily strained my patience, but for the most part I was on-board. It’s a sci-fi movie that’s supposed to be smart, how could I not be? Well… when it’s not actually smart! It acts like it’s a lot smarter than I think it actually is, although Looper does have some smart writing going for it and there’s some genuinely great ideas sprinkled around. If nothing else, no matter what I think of the film, the fact that it’s an original idea amidst a sea of reboots, remakes, and regurgitations is 100% commendable. If I still wore a hat, it’d be off.

The thing that bothered me about Looper, right from the beginning, was how much it had to explain itself. To me, this is exactly what a sci-fi story should never do. A lot of my love of sci-fi comes from my love of Philip K. Dick and his ability to drop a reader into a story with little to no explanation, feeding you necessary information naturally. Well… except for when he purposefully doesn’t want you to know what the fuck is going on, but that’s beside the point. Anyway, Looper practices the exact opposite type of storytelling, having nearly every dialogue exchange in the first hour be almost completely expositional. I’m not exaggerating, there’s nearly an hour of story setup. It’s insane. And what’s even more insane is that I liked that setup period WAY more than I liked the rest of the movie! I know, right? WTF! The second half isn’t so much bad as it is ridiculously drawn-out, but it was still a complete and total let down.

Through my various reviews I’ve talked a lot about non-white actors getting the shaft when it comes to casting, and Looper is no different. But today, I’d rather talk about another blight on cinema: the lack of quality female roles. There are three major female characters in Looper. One of them is a stripper who’s only in a couple of scenes, one of which she’s nude in. She serves virtually no other purpose than to add some titties to the movie. The second is an important character, but she’s given no lines at all. There’s a reason for this, and I respect Johnson’s choice here, but it’s still a completely silent female AND she’s acting maternal towards our hero. The final character is introduced as something different: a woman who can take care of herself. I thought for sure she would provide me the strong female character the film desperately needed, but when pushed she buckled immediately and was soon tending to the hero’s wounds. I’m sure many will overlook these weak characters, and I might have too if the sci-fi thrills were enough to distract me, but the pace of the movie is so slow that it gives you time to ponder all of this while it’s plodding along.

It’s such a shame too, as I was really on-board during the section where Bruce Willis was introduced. That scene and the disorienting chain of events that directly follows are incredibly well-done. It doesn’t make a lot of sense initially, but careful thought reveals just how perfect it all is. If only the rest of the movie offered more smart, cinematic moments like this. Looper had a lot of potential, but overall I was extremely disappointed and frequently bored. It’s not that I didn’t get it either. I got it, I just didn’t care for it.