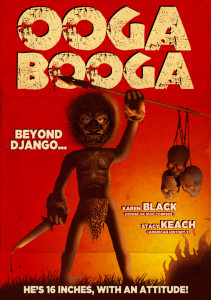 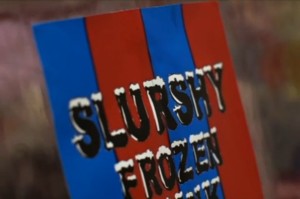 The taglines for Ooga Booga are: “Racists Beware!” and “Beyond Django…” I figured this was just Full Moon trying to goose people into watching their movie, but they’re actually pretty apt descriptions of the film. Ooga Booga does indeed murder any racists he comes into contact with (which is just about every white person in the movie). And it’s very similar to Django Unchained, with its white, racist characters who are ridiculously over the top (to the point of comedy) in their racism. But where I had a hard time laughing at them in Django Unchained because of the setting and the pure excess of it all, it actually works well in Ooga Booga. So yeah, I liked this better than Django Unchained!

In many ways this is the movie I wanted Django Unchained to be. A simple revenge tale without all the hullabaloo surrounding it. We find out that a character has a stash of blackface toys, within five minutes Ooga Booga is murdering them on-screen. No muss, no fuss. It’s light, breezy and fun. There isn’t a social message other than “Don’t be a racist,” but it’s a good one to reiterate, so I can’t fault them for that. Some of the methods or visuals used might cross the line of taste, but honestly this was a lot better in that regard than I had feared. And they’re clearly self-aware too, as Hambo is the one introducing all the truly awful stuff and Devin is there to shake his head and play the role of the socially conscious audience member. While acknowledging it doesn’t necessarily excuse them from social responsibility, it does make it easier to swallow. Selling the dolls of the stereotypes, though, not so much. In any case, I eagerly await the angry Redbox reviews to come when this hits kiosks March 26th.

It’s hard to walk away from this one and not feel like it could’ve been better, but for a modern Full Moon film, it’s easily one of the best. There are three main reasons why it succeeds as well as it does: the writing, the acting, and the puppeteering. This is hands down the best script a Full Moon movie has had since 2010’s Killjoy 3, featuring fairly developed characters and some good dialogue exchanges. Good writing is nothing without actors, and the cast of Ooga Booga are universally great. The extended cameos from Stacy Keach and Karen Black are fun and well-suited to them, and the unknown main players do great. I especially like Ciarra Carter who played Donna, Devin’s girlfriend. She could easily be one of those people who eventually breaks into the mainstream, with subsequent re-releases of Ooga Booga featuring her prominently on the cover. Time will tell, and I would love to see it happen.

Which brings me to the third reason: the puppeteering! Maybe I’m just easily impressed these days, but WOW did the puppeteering make a leap forward in Ooga Booga! The puppet looks great and he moves very fluidly. Admittedly a lot of what he’s doing is just shaking a spear around, but that spear-shaking looks great! More lifelike than any puppeteering seen in a Full Moon movie in years, Ooga Booga‘s main character is very well-realized. Band also brings back the “floor cam” as Ooga Booga chases characters around, with the low-to-the-ground camera giving us a “first-puppet” point of view. It’s great! 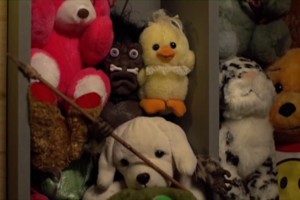 There’s not a lot of tension to the film’s struggles, but it never expects you to think there should be. This is a horror-comedy (as most Band films are), so we’re supposed to revel in its absurdity instead of point out its flaws or expect traditional filmmaking. What’s the point of watching low-budget releases if you just cross your arms and scowl while you hold them to Hollywood filmmaking standards? Where’s the fun in that? Independent film should mean that they can be truly independent and do whatever they wanna do, and in Ooga Booga this all comes together rather well.

I did find the rape about mid-way through the movie completely unnecessary and really hard to watch. Other than this small setback, Ooga Booga was a fun little movie. I think the lead duo of Devin and Donna got more lines in this 80-minute movie than Jamie Foxx and Kerry Washington got in the 165-minute Django Unchained, so it even outdoes that film in ways I never could’ve imagined. Beyond Django, indeed! That all being said, this is only a movie for a very specific group of people inclined to enjoy B-Movies like this. Mainstream audiences will be better served elsewhere. But again, I can’t wait for the Redbox reviews from those mainstream audiences to pile in.

Next week on Full Moon Tuesday, I’ll be getting back to the Mandroid “saga” with a review of Invisible: The Chronicles of Benjamin Knight!