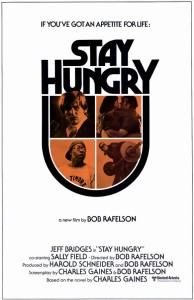 The main theme in Stay Hungry is right in the title. So when it takes the whole movie to get to that point, it’s a little hard to stay interested. A lot of the journey is fun, and there are a number of great scenes, but overall it’s much too long and obvious to be as deep as it wants to be. Craig is a character with no drive while Joe is one defined almost solely by his drive, and this passion and authenticity excites Craig. It invigorates him and makes him feel more than he’s ever felt. He even brings Joe and Mary Tate to a high-class party, hoping to inspire other rich people to be more passionate, but instead it ends in disgrace and humiliation as the rich people taunt Arnold to “show them his tits” while he’s trying to play the fiddle with his backwoods Alabama string band.

Yeah, you read that right. In this movie, Arnold not only lifts weights like a pro, he plays the fiddle like he grew up on a ramshackle Alabama porch. It’s actually done in a way that makes it pretty believable (at least in terms of everything else in this movie), and the scene that reveals this talent is one of the highlights of the film. Arnold is excellent in Stay Hungry, easily the best part of the film, which is all the more impressive considering this was Arnold’s first movie where his voice was heard (the original release of Hercules in New York committed the ultimate sin in dubbing out one of Arnold’s best traits). His character is given some choice lines during the final few minutes, and I especially liked when he told Bridges, “You can’t grow without burning.” 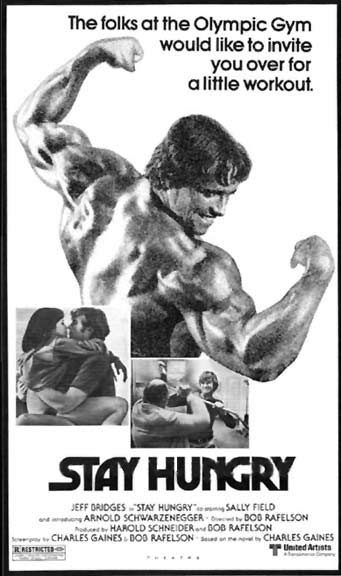 Arnold actually won a Golden Globe for his performance, too! In those days there were gender-specific “Best Acting Debut” categories, and he took home the gold. I’m trying to imagine what it would have been like to see Arnold for the first time in this movie. He was incredibly believable in the role, and not just because he was basically playing a varied version of himself. He handles his dialogue scenes really well, much better than you’d expect a bodybuilder to. His character lends the film something of an anchor, a dependable, wise sage who’s not much older than Bridges, but much more in tune with the world around him and the way it works. Arnold’s work here, while limited, really showcases how he has always been a better actor than his detractors give him credit for. I am so looking forward to working my way through the rest of his incredible filmography; you have no idea.

But even a good performance from Arnold can’t save this movie from the overlong, tonally strange thing it is. I respect the moral of the story, and I agree wholeheartedly that people are better when they’re hungry for something, working towards a goal with a drive and passion, but there are definitely better ways to tell that kind of story than what is presented here. This is the first movie I’ve seen by Bob Rafelson (who’s famous for directing Five Easy Pieces), but I can’t say I’m excited to see more. I’ll definitely see Five Easy Pieces and some of his other work with Jack Nicholson, but I don’t think I’ll be beating down the local video store’s door to do that. Oh wait, there aren’t video stores any more. Well, you know what I mean.