> Reviews by Author > Stephen's Reviews > Stephen reviews: Toward the Terra (1980) 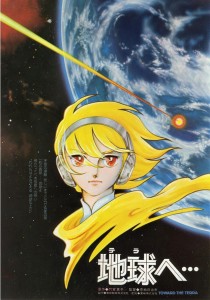 Within this society children are grown in test tubes, and once they reach the age of fourteen their memories are erased. Once in while, however, mutations occur, resulting in people called Mu who have psychic powers. These children are executed whenever they are discovered. Of course some of them escape and live in hiding. The film centers on Jomy, a boy who becomes the leader of the Mu, and his rival, Keith, a highly skilled agent of the computer-run society. 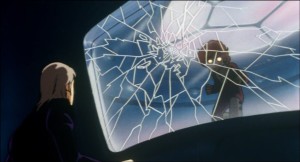 The film spans nearly two decades of struggle between the humans who strictly regulate access to the Earth, and the Mu who wish to return to Earth, knowing only a memory of it passed down by telepathy through the generations. This might have led to an action-oriented story, but despite the ensuing warfare Toward the Terra is more philosophical. It deals with the cultural and personal effects of a society run by computers, and the hatred developed over the course of the war. It’s a very speculative work of fiction, and it will appeal far more to someone looking for a thought-provoking film rather than an adrenaline-pumping one.

That’s not to say there is no action in this film. It takes a while to develop, but the war does rage. It slips in some cool dogfights in space, and how can you not love the scene where a psychic four-year-old tries to kill a man. It’s just that the story gives a moral and tragic overlay to the events, dealing with the reasoning and emotions involved rather than an intense struggle for survival. 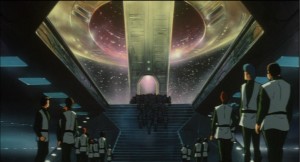 This focus is probably a good thing for modern viewers. Personally, I love the animation in this film, but people used to modern animation techniques will likely scoff at the outdated visuals. An action-oriented story would have been forced to rely more on the visceral impact of its imagery, and modern viewers would have been left unimpressed. But with a more intellectual approach, I hope that more people will be able to appreciate the film.

The animation is what you might expect from 1980, and it can leave a clumsy impression at times. But the animation is never lazy, tackling shots that are quite difficult to animate, and doing a fine job with shifting perspectives that can still cause problems for animators even with modern technology. There is a slow and deliberate pace to the animation, and it never hesitates to capture little gestures or often overlooked motions. Despite its obvious age, I can tell that the animators gave it their all, and I was very impressed with the result. 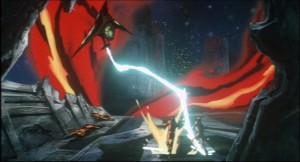 The visuals are one of the best parts of the film. It’s filled with weird-looking spaceships and metallic corridors. It’s the kind of stuff that any sci-fi fan would love, and its vintage makes it feel both quaint and unusual. I love the twisted, bizarre-looking spaceships and elaborate environments. And Jomy has one hell of a badass cape.

The film gets a bit clumsy at the end, unfortunately. It drops too many answers into the conclusion in order to rush the ending, which I felt was a bit too tidy and uplifting. But that might just be my preference for dark and dreary stories coming through. This is really a minor point in the face of the fascinating tale it weaves, and I can’t complain too much about it. I still had a great time with this movie.

I’m afraid a lot of people will not like Toward the Terra because of its antiquated animation, and anyone hoping for a rip-roaring sci-fi adventure is going to be disappointed. But if you like a good speculative story and can handle its age, then this is a highly recommended tale with a lot of great features.

One thought on “Stephen reviews: Toward the Terra (1980)”