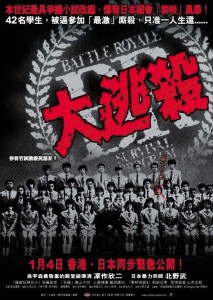 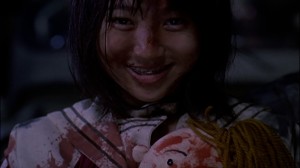 So this BR Act basically says that every year a random class of 9th graders will be selected to compete in the Battle Royale, a game of death where the only winner is the last kid standing. If multiple kids are alive when the timer runs out, no one wins and their electronic neck collars explode. Perhaps this isn’t the best way to deal with your country’s juvenile delinquency problems, but in a sci-fi near-future it makes perfect sense. Those near-future people are always one step away from total meltdown. Does that make us two steps away?

Battle Royale doesn’t waste time beating around the bush or providing you with unnecessary setup; it just gets right to the game. One moment the kids are on a bus for a school field trip, the next they’re waking up in a classroom with electronic collars on. The kids quickly realize what they’re in for when the teacher they once mocked informs them of the rules (with the help of a distinctly Japanese instructional video), delivering one of the film’s most intense and best scenes. Not only does it also clue us in on the boundaries of the game, it also lays out the simple fact that this film is not for the faint of heart. It’s going to be hardcore and it will not shy away from the violence at all. The scene is also especially chilling when it comes time for questions about the game, as the teacher calls the students by name. This isn’t a whitewashed game divorced from emotions, this is a bunch of people who know each other. 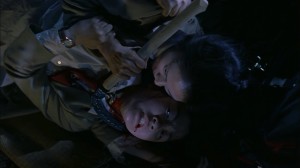 There is something sadistic in watching and getting entertainment out of a film centered around kids killing each other, but what really struck me about Battle Royale was just how un-sadistic it was overall. Sure, it shows kids murdering other kids, but it never lingers on the violence or glorifies it in any way. It remains quick, brutal and gnarly throughout, and it uses this feeling to its advantage.

Adults in this world haven’t been the best examples to these kids, so many of them rightly have a distrust of authority. This theme grows subtly throughout the film, ultimately paying off incredibly well during the closing moments. It’s a common feeling for parents to throw their hands up in despair, unable to figure out a way to control or teach their children. The extreme of this is the Battle Royale tournament, so it’s interesting to see it teaching the kids through trail by fire what their parents couldn’t. 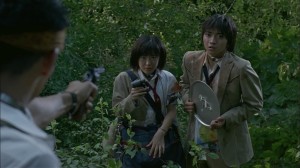 In terms of acting, some of the kids feel like untrained child actors, so the acting isn’t top-notch. But this is never an issue as they’re playing kids, and their acting makes it all feel that much more real. Takeshi Kitano is also excellent as the mocked teacher, especially so because of his stature as a resident badass of Japan. It’s interesting to see him play a tortured, broken man at the end of his rope, and even in this small role he shines quite bright.

Kinji Fukasaku has been a filmmaker on my radar for a while, but this is the first film I’ve actually seen from him. I really need to get watching, cuz this dude could make a movie! Battle Royale is frequently beautiful, affecting and brutal, and the ability to work with both artful and trashier, controversial palettes shows a filmmaker truly confident with his medium. This was his final film before his death in 2003, but his directorial career stretches all the way back to 1961, so it’s no surprise that Battle Royale is the mature work of a master craftsman.

Battle Royale represents classroom dynamics taken to the absolute extreme, and it’s an incredibly dynamic and memorable film. I imagine that future viewings will only seal its place as one of the best and most brutal near-future films of all time. If you can take kids killing kids for entertainment, then Battle Royale comes highly recommended and is well worth your time.