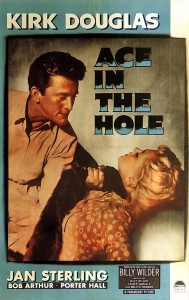 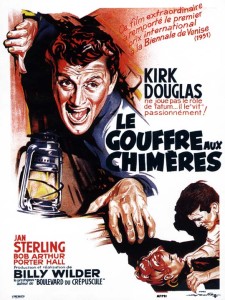 Tatum does find his big story when a cave-in traps a man named Leo underground. Tatum happens to be the first on the scene and he quickly takes control of the situation,  bending it to his best interests. I’ve probably already said too much already, but I don’t think spoilers matter all that much for this one. I mistakenly heard the ending a couple of months ago, and while I was frustrated in the moment, I found that watching the film with some foreknowledge was almost like re-watching the film while also watching it for the first time. It reminds me of my old practice of reading a book’s final sentence when I would start the book, in order to make the reading of the book more interesting and give it new context. I no longer do that, but watching Ace in the Hole tonight reminded me of that same feeling I’d get from doing it. That being said, I’m going to try to avoid direct spoilers, but I’d advise watching the film first if you’re overly concerned with discovering it on your own.

The obvious themes at work here deal with the media and the circus that can surround certain stories, and also the trust we place in our journalists. Above that, and perhaps more interestingly, the film also explores the human spirit when confronted with personal gain at the expense of another’s loss, and how the general Capitalist spirit of America is corrupt at its core. I’d say that right there is a main reason why this isn’t talked about in the same breath as Wilder’s other great films such as Sunset Blvd. or Double Indemnity, despite being just as good — if not better — than both of those films. Anyway, just about everyone presented with an opportunity to gain from the entrapment of Leo in the cave does so, creating a chain of back-scratching that all hinges on making them seem like heroes while Leo rots in the dirt. That American spirit of ingenuity and striving to get ahead can backfire, and it does so spectacularly in Ace in the Hole. 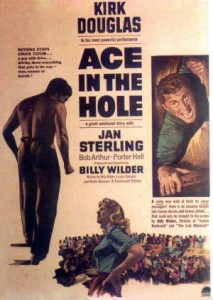 It could easily be argued that the film’s plot points are exaggerated, and that in reality it wouldn’t go down like it does in Ace in the Hole, but this exaggeration is the key to the film. In attempting to prove a point about the way society was heading, Wilder takes the situation to the extreme — to the point of pure absurdity. So while Ace in the Hole is not specifically realistic, the film world is where we can explore wildly exaggerated and extrapolated ideas of what might happen in a given situation. It’s like a good sci-fi film in that way, and in today’s wildly over-the-top, media circus landscape, the film is more resonant and applicable now than it ever was in 1951.

Kirk Douglas is an actor I’ve always liked, and he gives nothing short of a tour de force performance here. This is perhaps the finest work I’ve seen from him yet, as his portrayal of the devious, conniving Chuck Tatum is riveting, revolting and electrifying in every scene. The sheer amount of energy he thrusts into the character is astounding. The writing is also fantastic, consistently filling the scenes with snappy, direct dialogue that reminds me in ways of Sam Fuller’s. Speaking of Fuller, this film would make an interesting double feature with Shock Corridor, another film about a journalist willing to do anything to get his accolades. Or you could also pair it with Elia Kazan’s A Face in the Crowd if you want to get all up in your hatred of the media’s power.

But while the circus grows, literally and figuratively, the Chuck Tatum character is what really keeps the picture together; his arc is superb. It might not be the arc that audiences in 1951 wanted, but it’s one true to his unflinching, hard-nosed character. He enters the film down on his luck, needing the help of the townspeople (tow driver, editor, etc.) to get him back on his feet, much like Leo in the cave. While Leo is trapped physically, Chuck is trapped psychologically by his undying dedication to achieve the American Dream. He’s a master manipulator, never actively doing much of anything other than writing and influencing others, all with the expressed goal of achieving the “big time” again. Only when he realizes the reality of what he’s done does he take any true action, and this is also the first time we see him get behind the wheel and drive himself. He’s finally in control of himself and looking to make a real change.

Ace in the Hole blew me away, and is easily one of Billy Wilder’s best films. I’m sure this is influenced by my love of dark films about obsessive, troubled people, but it’s also incredibly well-shot, the acting is superb all around, and the writing just zings. And what a final shot! If you’re a classic film fan, you really need to check out Ace in the Hole.

Ace in the Hole is a part of the 2013 Blind Spot Series where I see one movie a month that I feel I should’ve seen a long time ago. It’s all the brainchild of Ryan McNeil over at The Matinee, one of the web’s premiere film blogs. Head over there tomorrow where he’ll have a post of his own for the series, as well as links to all the other people taking part in the series!