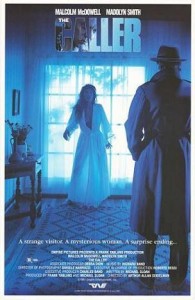 I’ll admit, I was fooled. I thought for sure these interesting elements would pay off in spades. This is, after all, a low-budget thriller. But then, after all this somewhat clever setup, a knock sounds at her cabin door and thus begins the first conversation between Madolyn Smith Osborne and Malcolm McDowell. They’re polite to each other as McDowell asks to use the phone to call a tow, but both parties seem to have information they shouldn’t. (Don’t be fooled.) 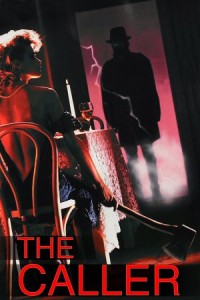 The Caller only has two actors, and there’s only so much you can do in a movie with two actors. I can definitely think of a few things better than endless, uninteresting conversations that ramble around the point. I may have found the dialogue excessive in Django Unchained, but at least Tarantino’s dialogue has the decency to be entertaining in its own right. The dialogue here just goes around in circles for minutes at a time, the players going back and forth like they were players in a game. (Don’t be fooled.) It’s all too surreal to be taken seriously, and you’ll have to suspend your disbelief pretty well to believe that any of this is actually taking place. But The Caller does acknowledge this, surprisingly, as reality is questioned several times throughout. (Don’t be fooled.)

But it’s too little too late, and really a couple of dropped hints that things are not what they seem, amidst a veritable sea of words, are never going to win over someone who isn’t already enjoying themselves. Likewise, the incredible gore FX in the closing minutes, where one character finds themselves on the business end of an electrical fire, aren’t enough to turn the tide. If only the preceding 90 minutes were more like the incredible melting hand and face FX, there would’ve been something here worth my time. These great FX didn’t make up for sitting through the movie, but at least the filmmakers saw fit to throw me an exposed phalange or two. Oh, and one guess what the two characters do after one of their faces has melted. If you said, “They have another conversation,” then you deserve a gold star. Literally nothing can stop the incessant talking heads in this movie!

The Caller was awful; I could barely stay awake. It’s no fault of the actors, though, as both Madolyn Smith Osborne & Malcolm McDowell perform admirable, melodramatic performances. They do their best with the material at hand, but with dialogue this uninteresting (to me) they can only do so much. I expected more from the director of Hercules in New York! That all being said, I’ve seen a number of positive reviews around the net, so it might just be a case of it not working for me. And if you’re intrigued enough to double-down on this movie, then you’re in luck because it was released to DVD via MGM’s Manufacture on Demand program and is available at Amazon.

Next week on Full Moon Tuesday, I need something much, much trashier to “cleanse” my palette, so I’ll be checking out 2003’s Birth Rite!