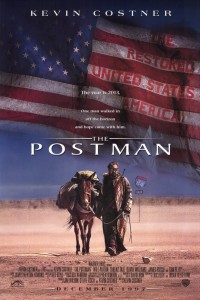 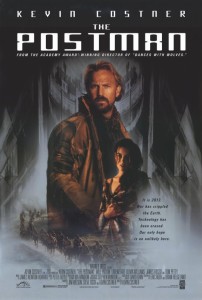 The Postman also brings us to the present day of 2013, offering us a vision of what the coming year might bring. Of course, we’re a little behind with the whole apocalypse thing, so if you’re a big fan of this movie, don’t move to the ghost town just yet. All kidding aside, if you like your future by way of the Civil War, then you’ll love The Postman. If you’re a little more purist, then its distinct lack of any sort of realistic treatment of the “derelict world” left behind after an apocalypse will leave you wanting quite a bit. I’m somewhere in the middle of those two camps, as I enjoyed The Postman for what it was. The sheer weight of what it wasn’t — and what it was trying to be — are much too much for it to actually be a good film, but it tries hard and is reasonably entertaining for the effort.

But honestly, I didn’t start with this feeling of mediocrity, in fact, I loved the first hour of The Postman. Literally everything up to the point when Kevin Costner acquires the postal uniform and starts impersonating a postman is fantastic. It feels like a ’90s, post-apocalyptic Spartacus, and truly captures the sense of the sweeping, Hollywood epics of old. But then the title comes true and Costner becomes the postman to this ramshackle, survivalist world. And it’s the beginning of the end, only there’s still a full two hours left in the film.

But those two hours aren’t all bad, they’re just mostly bad and somewhat boring. See, instead of the machismo-driven first hour, the second hour focuses on Costner’s postal “duties” and his budding relationship with Abby, one of the townspeople he meets in the first town he brings mail to. While a bit of romance is fine, and I can understand why it’s there, their relationship is so simple and without any sort of complex emotions that it’s incredibly hard to buy it, especially given the story of how they get together. Couple this with some really cringe-worthy ’90s folk-pop songs sung by the townsfolk at the dance, and we’ve got ourselves something pretty uninteresting.

And while you might expect the third hour to bring it all together and deliver us into the credits on a high note, instead the theme of “Postman as the world’s savior” is pushed even further in a scene where Costner arrives at Tom Petty’s dam town and everyone gets teary eyed when a little girl asks what a postman is. While I enjoy the role reversal of Costner’s resurrected governmental organization actually representing the rebellion in this movie, it’s still too much to handle when The Postman = Jesus. Although, I kind of forgot about this head-shaking scene when the following one featured Costner inexplicably soaring over the lush forest “wasteland” for what looks like miles in a gondola. Anyway, to say this movie lays it on thick would be an understatement; The Postman is dripping with sentimentality and drama, but almost none of it is truly affecting and it’s quite a disappointment after how much I enjoyed that opening hour. 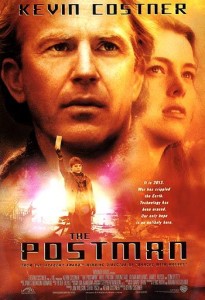 But as I mentioned, I did enjoy this movie regardless of its broad problems. When it gets super sappy or overwrought, it’s also just as hilarious. I know that the climactic confrontation at the end is supposed to be super serious, but I was laughing through most of it. And that’s really the only way to make it through The Postman without wishing an apocalypse to come and cut out the power so you don’t have to finish the movie. If you treat it like a B-Movie and just laugh at its inconsistencies and its embellished drama, it goes down much easier. A healthy love of westerns will also help a lot.

The Postman was Costner’s second film as director, after his Oscar-winning job on Dances with Wolves. I’m a huge fan of that film, and that’s good, because a lot of The Postman‘s visuals are reminiscent of that earlier film. The Postman is never as iconic or well-shot, but it is very nice to look at for the most part, provided you enjoy mountains, rivers, trees and slow-motion shots of little boys waving letters in the air. But Costner’s focus on specifically not really addressing the fact that this is the future — even one where society has completely crumbled — is really one of the film’s biggest downfalls as it drains the film of what makes it unique.

This is simply a Western epic that happens to occur in the future; dead tech and modern ideals have no place here. And where did everyone’s colored clothing go? If I’m to believe the apocalypse occurred sometime in the ’90s, then where are the Zubaz pants? It’s a little far-fetched to think that everyone only stockpiled brown clothing, but based on the epilogue scene set in 2043, I guess the muted colors were to symbolize humanity’s lost hope and colored clothing shows the renewal of said hope. Whatever.

While it once again allowed Costner to play cowboy, The Postman is a definite disappointment. I think it gets much too harsh of a rap among critics and film fans alike, but I can totally understand why. This is one epic tale that could have easily been edited down to be a much more palatable film, although at that point I think it’d also lose a lot of what makes it unique. While flawed, it is a fairly successful post-apocalyptic western, and as there aren’t too many of those floating around, I guess we’ll have to be happy with this one. I enjoyed it well enough, but I did have to watch it in segments. Like an impulse buy on eBay at 3am sent via third class parcel post, The Postman takes a while to get where it’s going and its ability to entertain is questionable.

Futures Passed concludes tomorrow with a look at an alternate 2013, and one that further explores the post-earthquake LA wasteland. Any guesses?