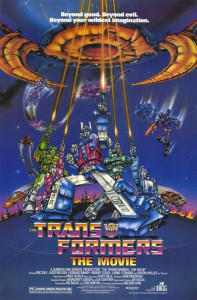 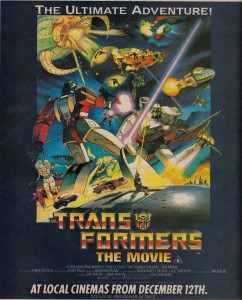 Transformers has to be the most violent children’s films ever made. It gets away with characters getting shot full of holes, dismembered, eaten alive, crushed under foot, and dropped into vats of acid. You sure aren’t going to see that kind of action in Wall-E or How to Train Your Dragon. Because the Transformers are robots, having them explode doesn’t count as gore, and the crew took every liberty they could with that loophole.

To fill the missing spots, and make use of its star-studded cast, the movie introduced a host of new characters that immediately became fan favorites of the franchise. If they look goofy and weird to you, keep in mind that this was set 20 years in the future, the year 2005. Don’t blame the Transformers for looking odd, blame GM for not making elongated, streamlined, neon-colored convertibles by now; those cars should have come out years ago.

One of the things I love about this film is how natural the transforming feels. The characters bounce back and forth between their forms without thought or hesitation. It’s as if they really were born (or created) to transform, and it is every bit as natural to them as walking is to us. 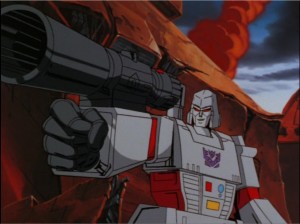 At this point everyone knows what Transformers are. Any scene making a big deal about transforming would have been a boring waste of time. Instead, the action scenes make as much use of the transformations as they can to make the battles flexible and creative. It culminates in a superb showdown between Hot Rod and Galvatron at the end of the film, where both characters use their different forms throughout the fight to great effect.

You can feel free to be skeptical of my love for this film. After all, how objective can I be toward my favorite childhood movie? Probably not much. But I’m going to try my best anyway. And I think there really is a lot of good content here. There’s a lovely prison planet for starters. It’s run by a bunch of lunatics that execute people for being innocent. But that’s just the tip of the iceberg. I already mentioned Unicron eating other planets, but he also uses some strange magic powers to revive an army of demonic/undead Transformers. Yes, you read that right. This movie has zombie robots. The mind boggles. 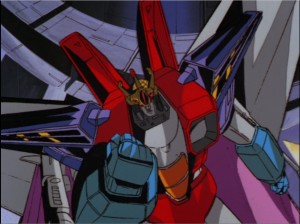 You may have also realized that Unicron is not some mindless force of destruction, but an intelligent being with his own objectives. And he is voiced perfectly by Orson Welles in his final film role. Welles in fact died only a few months after the recording, before the film even released. Apparently he was rather sickly at the time, and it took a bit of audio filtering to change his voice from gaspy and wheezy into the thunderous, booming voice of Unicron. Complain all you like about it being fake, but damn it, it worked. The foreboding dread his voice creates is incredible. In general, most of the voices in this movie are filtered to sound more robotic. It can cause some indecipherable dialog at times, but it just wouldn’t be Transformers without those vocal effects.

The acting all around is superb. Every one of the performances fits perfectly with the character, and there’s a lot of good talent here in case you skipped the list of actors at the top of this review. I want to point out Leonard Nimoy as my favorite, though. His character is one of the most fearsome sounding villains I have ever heard. You normally only think of him in the dry, emotionless role of Spock, but Transformers is a whole different story. I wish he had been cast as a villain more often, because he really delivers the goods here. 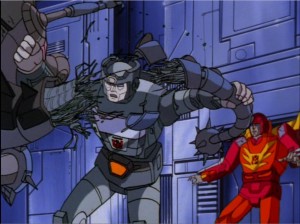 And should I bring up the directing? I always feel incompetent to judge the finer points of film craft, but I’m pretty confident about this one. It’s brilliant. Every scene feels dynamic and intense, squeezing in every drop of excitement that can fit. It even gives punching buttons on a computer terminal a sense of urgency.

I’ve been raving about this film for a while now, but I did promise to be as objective as I could. So I’m going to try and point out some flaws with the film, although they honestly don’t feel much like flaws to me. The first and most obvious would be the animation, which is far from amazing, but it is also far from the crap present in the TV series. It doesn’t hold up to more “serious” animation, but it works well enough. 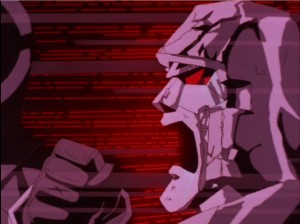 There is also a very distorted sense of size. Part of this is simply that when showing a conversation between a person (or robot) and a planet-eating monster you’re going to have problems showing both at the same time. Interactions with Unicron are always a little out of scale. Actually they are a lot out of scale. I can see this bugging people, but for the sake of narrative flow, if nothing else, the scenes still work and create a dramatic effect. Besides, Transformers has always had a screwy sense of scale. Megatron transforms into a handgun that other characters can wield, and can even shrink down to the size of a human gun. Blaster and Soundwave both turn into cassette decks. Cyclonus transforms into Galvatron’s personal starfighter, which leads to one of my favorite scenes as Galvatron hops out of the cockpit and Cyclonus transforms and walks up behind him, suddenly almost the same height. Size changing is such a staple of the ’80s era Transformers that one more goofy scale issue is hardly worth worrying about. 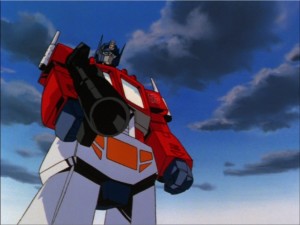 Others might complain about the breakneck pacing. This was a movie designed for children and their notoriously limited attention span. The movie whips from action scene to action scene with hardly a pause in between. As an adult, it does feel too rushed, but as a child it was thoroughly engrossing, and I can hardly find fault with crafting a film to please its target audience. Besides, if I had to make a choice between too fast and too slow pacing, my money is always going on fast.

Also related to being a children’s film is that some of the comic relief characters can be pretty annoying, especially Wheelie. I suspect Grimlock will get on some people’s nerves as well. They are far too engrained into my childhood to ever hate them, but I can at least recognize that my nostalgia is at work here. Fortunately, they are nowhere near as pervasive as Jar-Jar was in Phantom Menace. You’ll have a few scenes of irritation, but the film always has bigger and better things to get on with.

Why am I even talking about such minor issues? Transformers has interstellar warfare, a prison planet run by a psychotic judicial system, an army of undead Transformers, and an entire freaking planet as the main villain. And it’s all tied together by excellent directing and excellent acting. Man, I haven’t even mentioned the totally bitchin’ rock soundtrack that fills nearly every scene with pure awesome. What more could you ever possibly want from a movie?

Futures Passed continues tomorrow with two brothers doing their best to survive in the post-earthquake LA wasteland. Any guesses?