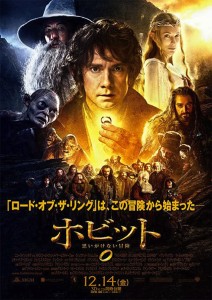 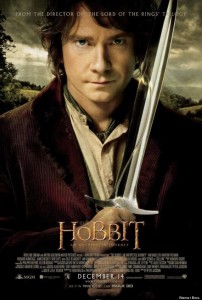 I’m hesitant to get into any specifics regarding this film, because much of my enjoyment came out of the freshness of the material. I’ve read The Hobbit three times, but that was all the way back in my teenage years, and I only saw the trailer for the film a couple of times (and I made it a point not to be too observant). The sheer amount of amazing stuff that I hadn’t seen was astounding, and as each new scene unfolded I thought for sure that it would be the last remaining thing that would wow me. But time and time again, Peter Jackson and his absolutely incredible team, took me on a journey for the ages. Not only do I think that The Hobbit is a great film, I have no problems calling it one of the best fantasy films of all time. When Jackson blew the lid off of the fantasy genre in 2001, it led to a slew of films trying to capitalize on that fairly untapped market. With The Hobbit, it’s like he’s casually brushing all the imitators aside and showing them how it’s done.

In terms of being a part of the Lord of the Rings franchise, it feels as if they simply unearthed the reels of The Hobbit in some forgotten Hobbit hole in New Zealand, as the film looks exactly like its older counterparts. The series aesthetics are absolutely seamless, and the film stands as a testament to the power of cohesive design through a film series. If only Star Wars was so smart to respect what had come before. From the returning actors, to the returning sets, to the look of literally everything, Middle Earth is exactly as you left it, and it’s gorgeous. Oh, and all the new locations? Just as incredible as you’d expect.

I also loved the inclusion of songs in the film. The LOTR films largely did away with the songs and chants of the book, and I agreed with Jackson’s choice for those films. If the Fellowship went around singing, it just wouldn’t have that same “impending doom” feel to it all. But here, where the tone is inherently lighter, the songs are perfect. The trailer wisely included the best of these, the dwarves’ solemn sing-a-long at Bag End, and throughout the film this musical theme continues to crop up as the heroic musical cue for the dwarves. It’s a gorgeous melody, and one I’ll most likely be humming all the way till next year’s release of The Hobbit 2: The Hobbiting. 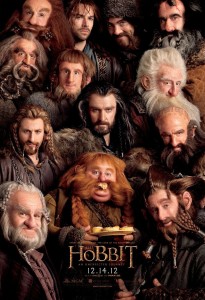 The question on most people’s minds about this film (and the two following it), is whether or not Peter Jackson and Co. are milking the shit out of a short, briskly paced book to make heaps of money and then guard their hordes like Smaug the Dragon. Simply put: Nope. Many will tell you otherwise, citing such inflammatory words as “bloated,” “overlong,” or using Bilbo’s line in LOTR “like… butter scraped over too much bread.” That one really raises my feathers. Anyway, they’re wrong. Well, at least in terms of my experience with the film. The Hobbit is exactly what it needs to be, and the success of LOTR has allowed Peter Jackson the freedom to realize the book in great detail. If you’re on-board for an adventure that plays out like a novel, this is such a rich, rewarding experience; I simply can’t imagine the film in any other form. To cut this in half to accommodate a two-film series would rob us of many great scenes that aren’t specifically necessary to the narrative, but serve to broaden the adventure and the world. I can easily understand why the choice was made for a trilogy, and I almost wish there was a version of LOTR that took the same care, resulting in a 10-film LOTR series. I’m ultimately happy with what we got, but my mind boggles at the possibilities.

This brings me to the other major questionable aspect of the production: 48fps. I saw the film in 3D at 48fps and I’m glad I did. I don’t know that I’d recommend it to everyone, but I’m glad I saw it this way. The 3D was immersive and even though it wasn’t too special, it was like a cherry on top of a beardy, dwarven sundae. But the 48fps took some getting used to. At times it looked as if the camera or the characters were moving too quickly, like someone accidentally set the camera to 24fps on that shot and no one caught it, only to have it projected at 48fps (and thus causing the speed up). But during the action sequences it really cleared up the motion blur that has long been something we’ve all learned to expect and accept in films (perhaps subconsciously). It was a very interesting film-going experience, and one I wouldn’t trade, but it does rob the film of a lot of its cinematic look, making it instead look like an incredibly mounted TV miniseries. That goes away once you get used to it, but it is definitely jarring to say the least. As one of the staunchest supporters of the medium of film, I should be railing against this blight on the history of cinema, but instead I’m singing the film’s praises. The Hobbit is good enough to make me overlook many of its digital presentation oddities, mostly because I know that they won’t be there when I watch the film in 24fps later, and because the story and visuals held me fully enraptured from start to finish.

I’ve always thought that J.R.R. Tolkien was a great, imaginative storyteller, but not a very good writer, and Peter Jackson’s adaptation of The Hobbit proves this to me once again. Even having read The Hobbit multiple times, I was surprised by many of the things that happened in the film. I thought perhaps they were Jackson’s additions or something added from the LOTR appendices (which I have never been able to get through). Upon returning home I started scouring the book, and lo and behold many of those wonderful things were there, buried in the text as minor, insignificant moments without any weight to them. But here Jackson lets them breathe and gives every thrilling, fantastic moment the dignity it deserves. The ties to LOTR are woven skillfully into the narrative as well, and while this is definitely not as good as the first of that trilogy, this is still pretty damn amazing. I loved The Hobbit.