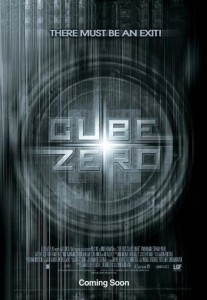 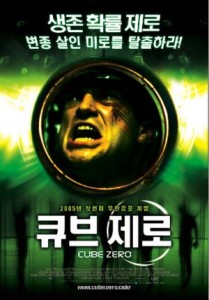 And really, all the kills here are pretty well done. There’s even another gnarly, slicing wire kill, and if you’ll remember from my Cube review, I love gnarly, slicing wires. We’re also treated to a great head explosion, but even these wonderful bits of gore can’t save a movie collapsing in on itself. I even liked Cube 2 better than this one, despite all of these great positives that were by themselves much better than most things about Cube 2. And y’know what? I probably could have tolerated this one’s stupidity if it weren’t for the late-game appearance of a character named Jax.

Jax is a guy with one eye, who apparently works for the people that run the cube, and his character is awful. He’s so over the top that at times I felt like I was watching an episode of the Power Rangers. Y’know those rub-your-hands-together-and-cackle-wildly villain’s lair scenes in Power Rangers? Jax’s scenes feel just like that. And I don’t mean that in a “they’re a lot of fun” sort of way either, because those scenes in Power Rangers are fun as shit. Here they’re just ridiculous and mind-blowingly stupid. I’m almost completely at a loss for words. 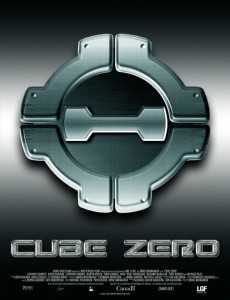 The cube itself returns to something of its former glory, but this cube is even more primitive. Instead of the cohesive, industrial design of the original’s set, this cube feels more jury-rigged and experimental. The title is exactly correct, if the first cube was “Cube 1.0,” then this one definitely feels like the original, prototype version. I really enjoy this aspect of the Cube series, as each film seems to respect the ones that came before it and do its best to fit alongside the others.

The production feels like it’s a bad TV movie, like something produced for the Syfy channel but with a bigger FX budget. There are some interesting filmmaking techniques used throughout though, and I especially liked how they played with the lighting during the dream sequences, creating a bleed of light that streaked across the screen. I don’t know that it accurately portrays what dreams look like (at least not mine), but it does create a striking, memorable image and that’s the most important part in a movie, no?

And in spite of my general hatred of most of this movie, I must give the filmmakers credit for not using the “I worked on the Cube” reveal that the other films (especially the second) kept returning to. It’s a welcome respite, but not nearly enough to make me forget about everything else I hated about this film.

If you’re already two cubes deep in the Cube series, I’d advise just staying pure and avoiding this one. Of course, there are lots of people that enjoyed this film, so you might want to watch it anyway, in spite of my warnings. And besides there are those great moments of gore, which are arguably good enough to warrant watching this if you’re into such things. Oh God, what am I saying? Am I actually cautiously recommending this movie that I despised? What’s wrong with me? Who are you people? What have you done to me? What happened to the lights? Where am I? The cube? AHHHHHHHHHHHHH!

Cube Zero was a Reader’s Choice selection from Rodney of Fernby Films.